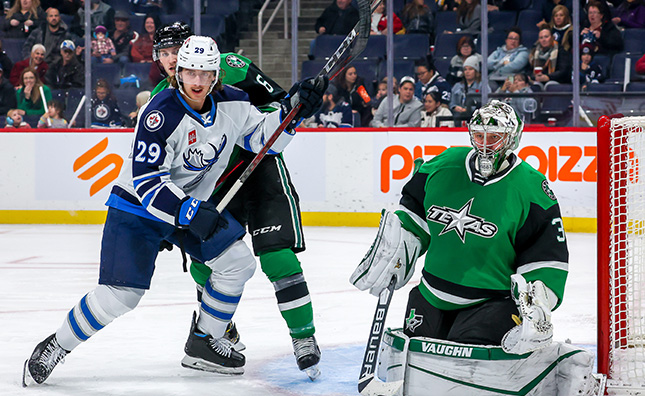 The Manitoba Moose (6-2-1-0) took on the Texas Stars (5-3-1-1) on Sunday afternoon at Canada Life Centre. It was the second of two games on the weekend between the Moose and Stars. Manitoba was looking to get back in the win column after suffering a 4-1 defeat on Friday.

Neither side was able to tally a goal through the opening 20 minutes of play. Both squads were granted two chances apiece on the man advantage, but Oskari Salminen and Anton Khudobin were up to task and turned away all opportunities they faced. Salminen also made a brilliant sprawling save on Texas forward Mavrik Bourque in tight to keep the contest scoreless. Nicholas Jones, Leon Gawanke and Declan Chisholm paced the Moose with two shots each, while Texas was led by Curtis McKenzie who garnered three of his own. Texas had the 13-10 edge as the horn sounded to draw the first to a close.

Manitoba opened the scoring in the second. Alex Limoges walked in and fired a hard shot that Khudobin kicked away. The forward followed the play and stole the puck back before picking his spot past Khudobin to give the Moose a 1-0 lead. Texas tied the game later in the stanza on the power play. Riley Barber sent the shot in front where it was deflected into the goal by Curtis McKenzie to the contest 1-1 with his fourth of the season. The two clubs took a tie into the second intermission.

Neither Salminen nor Khudobin gave an inch in the third frame and the game remained locked in at one goal for either side. Texas pushed the pace of play and ended the third ahead in shots by a count of 9-7 as the teams geared up for overtime. The extra period produced great chances at both ends of the ice, but it was the Moose who came up victorious. Mikey Eyssimont freed up the puck for Limoges who deftly slipped his second of the game past a sprawling Khudobin to propel the Moose to a 2-1 victory. Salminen captured the win and vacuumed up 32 total pucks, while Khudobin was tagged with the loss and ended with 28 stops of his own.

“The start wasn’t as bad as Friday even though we gave plenty of chances to them today. But we built it up, built it up through the end of the game and we were the better team.”

Manitoba and Calgary meet for the first time in franchise history at Canada Life Centre on Friday, Nov. 11. Puck drop for is slated for 6 p.m. Tickets to all upcoming Moose home games are available at MooseHockey.com/TICKETS.