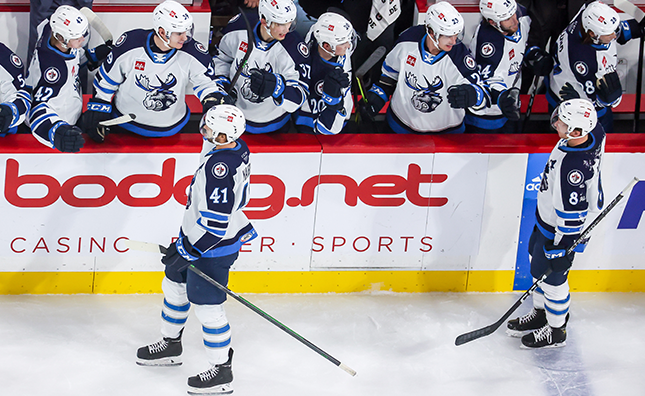 The Manitoba Moose (5-1-1-0) rematched with the Iowa Wild (1-3-0-2) on Sunday afternoon at Canada Life Centre. It was the final of two straight games on the weekend between the Moose and Wild.

Iowa opened the scoring just shy of the five-minute mark of the opening frame. A Moose faceoff win slipped into the goal and was credited to Mike O’Leary. Manitoba struck back with under a minute to play in the first stanza. Leon Gawanke found Cole Maier, who skated out of the corner with the puck. The pivot spun and found the top corner through traffic past Zane McIntyre. His first of the season tied the contest 1-1. Manitoba led in shots 15-9 after the initial 20 minutes of play.

Manitoba was forced to kill a four-minute double minor early in the second period. The Moose got through the extended Wild power play and forged ahead on a man-advantage of their own. Jansen Harkins fed Gawanke and the defenceman ripped a shot from the blueline to push Manitoba ahead 2-1. Manitoba found twine again 15 seconds later. Ashton Sautner threw the puck in front and Maier swept it home for a 3-1 Moose lead. Manitoba was ahead 23-20 on the shot clock through 40 minutes.

Manitoba took advantage of a power play and added to its lead in the third. Declan Chisholm found Wyatt Bongiovanni, who ripped a shot past McIntyre for his second of the season and a 4-1 Moose lead. As time wore on, the Wild fought to get back in the game. They pulled goaltender McIntyre in favour of the extra attacker with over four minutes left, but Holm and the Moose negated any further offence from Iowa. Holm claimed his second win of the season and ended with 33 stops in the victory while McIntyre picked up the loss on the back of 26 saves of his own.

“I think we felt better about the game this afternoon. Even after the first one when we weren’t leading, we talked a lot about puck management. Not necessarily that it was bad, but certainly that there was a spot we could work on. I thought we did a lot better with that tonight.”

The Moose remain at home and welcome the Texas Stars to Canada Life Centre on Friday, Nov. 4. Puck drop for is slated for 7 p.m. Tickets to all upcoming Moose home games are available at MooseHockey.com/TICKETS.