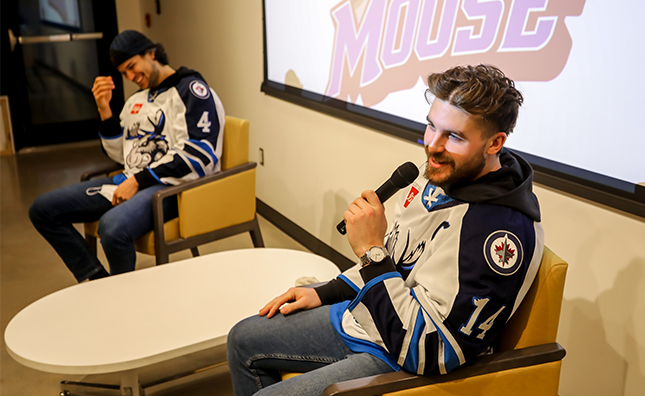 The Manitoba Moose Hockey Club, in conjunction with the American Hockey League, announced today Moose captain Jimmy Oligny is the Moose winner of the IOA/American Specialty AHL Person of the Year award.

This is the second time in the past three seasons that Oligny, 29, was named the Moose winner of the IOA/American Specialty AHL Person of the Year Award and third time nominated in his eight-season career.

Oligny was involved in the Moose Community Practice Series (March 7), where four minor hockey teams won an outdoor practice at Camp Manitou led by instructors from Jets Hockey Development. The skate was followed by a Q&A with Oligny and fellow defenceman Johnathan Kovacevic. The father of three also participated in a welcome video and wrapped gifts for children attending the Moose Holiday Game (Dec. 11) from the Children’s Rehabilitation Foundation.

Oligny is heavily involved with the True North Youth Foundation’s Project 11. The veteran defender helps record video messages in both English and French for the initiative, answering children’s questions on methods Oligny uses to improve his own mental health. Additionally, Oligny is featured in a Tai Chi video series, which is part of the early years Project 11 curriculum for students aged K-3 across the province of Manitoba.

While the team was limited in terms of in-person community appearances this season due to COVID-19 protocols, Oligny and his teammates were able to visit virtually with schools (Feb. 16) across Manitoba to promote literacy as part of the Stick to Reading initiative. Oligny, along with teammate Thomas Caron, read and conversed in both French and English with a French immersion elementary school class.

The full list of team winners of the IOA/American Specialty AHL Person of the Year awards can be found at TheAHL.com. From this field of 31 nominees, Dakota Mermis of the Iowa Wild was selected as the winner of the Yanick Dupre Memorial Award for 2021-22.

The Moose are back in action at Canada Life Centre for Game 4 of the Central Division Semifinals on Friday, May 13. Puck drop is scheduled for 7:00 p.m. CT. Single-game tickets are available at MooseHockey.com/TICKETS.

Manitoba Moose playoff ticket packages, which guarantee your seat for the entire playoff run, are available at MooseHockey.com/PLAYOFFS.

You can catch the game on TSN, 680 CJOB, the Manitoba Moose App and AHLTV.