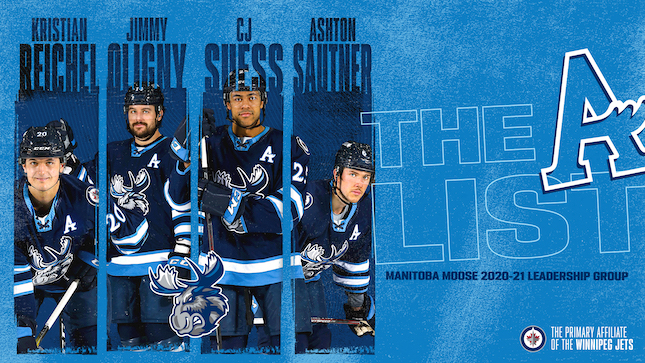 The Manitoba Moose Hockey Club announced today its Opening Night Roster for the 2020-21 season. The club also announced forwards Kristian Reichel and C.J. Suess along with defencemen Jimmy Oligny and Ashton Sautner will all serve as alternate captains for the campaign.

The Moose drop the puck on their season tonight against the Toronto Marlies at Bell MTS Place at 6 p.m. CT.

Listen to the game live on CJOB.com/sports or moosehockey.com/listenlive. Watch the matchup with AHLTV.com‘s free preview. Coverage begins at 5:45 p.m.

The Moose open the season with 31 players on the roster including three goaltenders, 10 defencemen and 18 forwards. The roster has an average age of 23.16 years. The Manitoba roster features 16 rookies with 10 players set to make their AHL debuts.

Alternate Captains
Reichel, 22, is in his third season with the Moose after signing as a free agent ahead of the 2018-19 season. In 94 games with Manitoba, the winger has 27 points (14G, 13A). The Litvinov, Czech Republic native signed a two-year, entry-level contract with the Winnipeg Jets over the off-season. Previously Reichel served as an alternate captain with the Czech Republic’s U20, U18 and U17 squads.

Suess, 26, enters his third campaign with the Moose having suited up for 89 games with the club while tallying 41 points (23G, 18A). Suess led the team with four game-winning goals and tied for the club lead with six power play goals during the 2019-20 season. The Forest Lake, Minn. product was previously the captain for his final two seasons with Minnesota State-Mankato before turning pro.

Oligny, 27, is a veteran of 360 AHL games with the Moose, Chicago Wolves and Milwaukee Admirals. In his third season with Manitoba, Oligny has appeared in 85 games for the Moose while totalling 26 points (6G, 20A). The defenceman was named the club’s 2019-20 Julian Klymkiw Community Service Award winner. A native of St-Michel, Que., Oligny served as an alternate captain with the PEI Rocket and Rimouski Oceanic back in his junior days.

Sautner, 26, is a newcomer to the Moose, but no stranger to taking on a leadership role. The Flaxcombe, Sask. captured a Memorial Cup championship with the Edmonton Oil Kings in 2014 and captained the club the next season. Since then, Sautner has appeared in 240 AHL contests, all with the Utica Comets. The defenceman has 49 points (11G, 38A) through his first five AHL seasons.