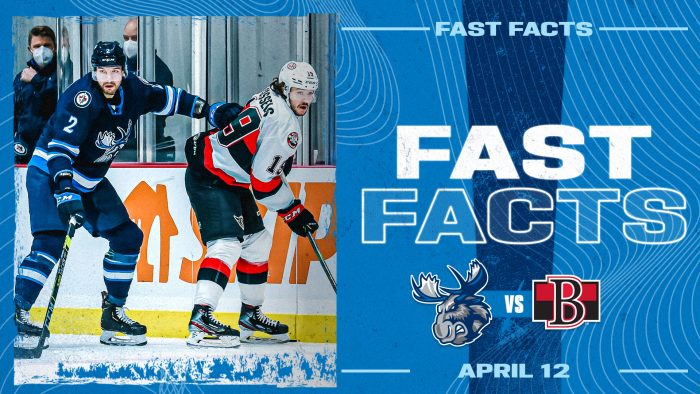 The Moose have won two straight after an explosive third period on Thursday and an overtime victory on Saturday. Despite a depleted defence, the Moose gutted out the 3-2 overtime win over the weekend. Now the Moose eye a third straight win over the visiting Belleville Senators. Listen to the action on cjob.com/sports and MooseHockey.com/LISTENLIVE or watch live with a subscription to AHLTV.

Cole Perfetti recorded two assists during Saturday’s victory against Belleville. Perfetti marked the primary assist on Nathan Todd’s power play goal during the second period and also posted the primary assist on Jeff Malott’s overtime winner. Perfetti is the only Moose player this season to have recorded multiple assists in overtime (2A). The centreman notched his second multi-assist contest in as many games and has recorded four helpers during his assist streak.

Pucks to the Net Pays Off

Nathan Todd scored on a Moose power play opportunity during Saturday’s contest against the Senators. The centreman registered six shots during the game. During 23 games this season, Todd has recorded five or more shots on six occasions and has been rewarded for his efforts, scoring in all but one of those games. All three of Todd’s multi-point contests this season have been notched when he posted five or more shots.

Moose forwards Cole Maier and Nicholas Jones each have points in three consecutive games. Maier has four points (1G, 3A) during that span, while Jones has three points (1G, 2A). Scoring his fifth goal of the season on Saturday, Maier is just two off his rookie total from 2019-20 when he tallied seven goals in 59 games. Meanwhile, Jones scored his first career shorthanded goal on Thursday. The pair of forwards have been linked up for most of the season. The duo has been paired on the same line for 15 of the 17 games both players were in the lineup. Maier and Jones have been on the same line for 13 of the past 14 games.

Jeff Malott’s team-leading 10th goal of the season was the overtime-winner on Saturday afternoon. It was the rookie’s first game-winning tally of his professional career. The goal also gives Malott sole possession of the lead in goals among AHL rookies. Malott is the only undrafted player to rank among the top-20 in goals by AHL rookies. He is also one of just four undrafted AHL rookies among the top-21 in points. Malott comes into today’s game with three points (2G, 1A) in his last two games. The Burlington, Ont. product is tied for seventh in the AHL in goal-scoring.

C.J. Suess collected an assist during Manitoba’s win Saturday afternoon. Suess is currently on a two-game point streak as he scored in Manitoba’s 8-5 victory on Thursday against the Senators. The Forest Lake, Minn. product has 11 points (5G, 6A) in 23 games with the Moose this season and ranks fourth on Manitoba in points.