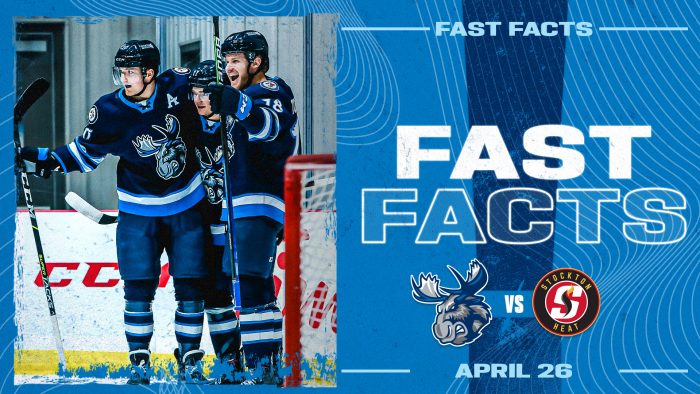 It was a historic day at Bell MTS Iceplex on Saturday. The Moose gained a new all-time wins leader as part of a 3-0 shutout of the Stockton Heat. The victory was Manitoba’s fifth consecutive win. The Moose and Heat start off a back-to-back set at 1 p.m. CT today. Listen to the action on cjob.com/sports and MooseHockey.com/LISTENLIVE or watch with a subscription to AHLTV.

With his shutout win on Saturday, Eric Comrie became the winningest goaltender in Moose franchise history. The former second round pick of the Winnipeg Jets posted his 85th victory with the franchise, pulling away from the previous record holder, Cory Schneider. In addition to claiming top spot in the wins category, Comrie’s 10th shutout with the franchise moved him into a tie for third on the all-time list, matching Connor Hellebuyck and Alex Auld. In two starts against Stockton this season, Comrie has two wins supported by a 1.00 goals-against average and a .941 save percentage.

Rookie forward Cole Perfetti tallied another multi-point game on Saturday. The 10th overall pick in 2020 posted a goal and two assists, factoring in on all three Moose goals. It’s the fourth time in the last five games Perfetti recorded two or more points in a contest. He recorded three points in two of his last three games. The Whitby, Ont. product has 11 points (4G, 7A) in just six games during the month of April. That ties him for the lead among first year AHL’ers. Perfetti is in a three-way tie for third among AHL rookies with 21 points (8G, 13A) in 26 games. He is one of two players born in 2002 in the top-10 along with Ontario’s Quinton Byfield.

Moose defenceman Declan Chisholm tallied an assist on the eventual game-winner on Saturday. The helper was Chisholm’s 10th of the campaign, making him the first Manitoba defender to reach double-digits in assists this season. Chisholm sits in a three-way tie for fifth among rookie defencemen in assists and is part of a log-jam for the fifth spot in overall points by rookie defenders. The Bowmanville, Ont. product leads Moose defenders with 12 points (2G, 10A) in 25 games.

Here For a Good Time…

Dominic Toninato’s stint with the Moose wasn’t a long one. He was reassigned to the Winnipeg Jets Taxi Squad today, but made an impact at the AHL level. Toninato scored his first two goals as a member of the club in just his second game since being assigned to the Moose by the Winnipeg Jets. It’s the fourth time in his AHL career Toninato tallied a multi-goal game. In addition to the two goals, Toninato recorded five shots on goal and a plus-three rating. In 105 career AHL outings, Toninato has 51 points (28G, 23A).

Kristian Reichel picked up an assist in Saturday’s win, helping out on Manitoba’s third goal of the game. Reichel has points in consecutive contests against Stockton after scoring the fifth Moose goal on Thursday. The Litvinov, Czech. native has five shots over his past two outings and was a plus-two rating Saturday afternoon. Overall, Reichel has eight points (5G, 3A) in 20 games this season.