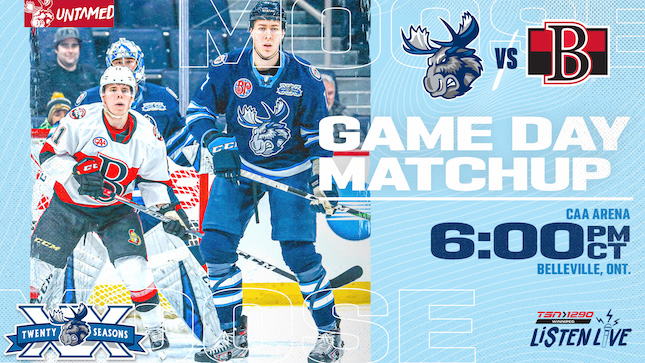 The Moose and Senators clash in the second game of back-to-backs for both clubs. Belleville fell 6-3 to Utica on home ice last night while the Moose dropped a 4-1 decision in Laval.

Manitoba couldn’t pull off a second straight comeback on the Rocket at Place Bell. Laval opened the scoring midway through the first as Charles Hudon banged in a rebound. The Moose penalty kill continued its strong work, shutting down a five minute major to start the second period. Kristian Reichel tied the game, ripping a shot past Cayden Primeau with just over five minutes left in the second. Unfortunately for Manitoba, Laurent Dauphin scored a shorthanded tally just over a minute later. That tally stood up as the winner. Jake Evans scored a dagger with two minutes left and Kevin Lynch added the fourth into an empty net.

Reichel’s goal was his eighth of the season as he broke onto the scoresheet for the first time in eight games. It was his longest stretch without a goal on the campaign. The second-year AHL’er has now quadrupled his 2018-19 goal total in 21 less games. He’s also up to 13 points (8G, 5A) on the season, three points past his rookie tally from last season.

Skyler McKenzie played his 100th AHL game last night. The forward actually made his AHL debut in the 2018 Calder Cup Playoffs, scoring the eventual game winner in Game 3 on April 25 in Grand Rapids. Since then, McKenzie’s 100 regular season games have included 39 points (17G, 22A). The Sherwood Park, Alta. native is up to 23 points (9G, 14A) in 53 games, all career highs, in his second professional season.

Manitoba could have Andrei Chibisov back in the lineup tonight. The big Russian forward was reassigned to the Moose yesterday by the Winnipeg Jets. Chibisov ranks fifth on the Moose with 24 points (7G, 17A) in 48 games this season. The 26 year old made his NHL debut during the callup, appearing in two games while averaging over seven minutes of ice time.

Belleville’s high-octane offence will be without its leading scorer. Josh Norris was recalled by the Ottawa Senators yesterday morning. The former first round pick of the San Jose Sharks has 58 points (30G, 28A) in 51 games. The Moose will still have to deal with another dynamic rookie in Alex Formenton, who has 46 points (23G, 23A) in 53 outings. The two rank third and ninth respectively in the league’s scoring race.

Coverage of tonight’s game on TSN 1290, moosehockey.com/listenlive and AHLTV gets going at 5 p.m. CT. Austin Siragusa leads this off with Moose Weekly, followed by the pre-game show at 5:45 and puck drop at 6:00.