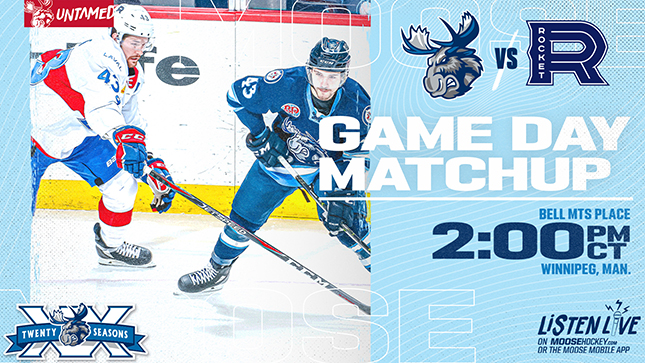 The Moose and Rocket clash for the second straight afternoon today at Bell MTS Place. It’s Peter Stoykewych Mini Bobblehead Day, so the first 3,000 fans in attendance will receive a bobblehead of the Moose captain. Stoykewych’s teammates look to rebound from a 3-0 loss to the Rocket in yesterday’s meeting.

Cayden Primeau made 17 saves for his third shutout of the season and downed the Moose yesterday. Charles Hudon scored the eventual game-winner early in the second. Riley Barber and Nikita Jevpalovs added goals in the third for Laval. The Moose came within an inch of tying the contest when it was still 1-0 in the third period. JC Lipon rang a shot off the crossbar on a shorthanded two-on-one. Eric Comrie made 33 saves in the defeat.

Lipon’s chance on the penalty kill highlighted a strong night for the Moose when working down a man. Manitoba killed off all six penalties faced, including two full minutes down to three skaters. Over the past three games, the Moose have allowed just one power play goal on 16 chances against. It was the fifth time this season the Moose have had a perfect night on the PK when facing five or more power plays. Forward C.J. Suess feels the team’s play on the penalty kill gives them a chance to win.

“It’s keeping us in the game sometimes, it especially did today,” Suess said following the loss. “We just have to stick to it and hopefully get the rest of our game going.”

With Nelson Nogier recalled shortly before yesterday’s game the Moose were without two key pieces on the blue-line. Cameron Schilling is also with the Jets, so Charles-David Beaudoin and Hayden Shaw drew into the lineup. Beaudoin recorded one shot on goal and an even rating, while Shaw was a minus-one rating in the contest. The game was Beaudoin’s third of the season with the Moose and Shaw’s fourth AHL game in his first professional season.

Offensive chances were at a premium yesterday, but Skyler McKenzie and JC Lipon were able to lead the way in getting pucks on net. The pair tallied three shots each as their line with C.J. Suess collected the most opportunities. The line of Kristian Reichel, Michael Spacek and Andrei Chibisov followed up with a combined four shots from the group.

Manitoba’s challenge today is to generate more opportunities against a Laval defence that boasts plenty of NHL experience. The rearguards for the Rocket yesterday have appeared in a combined 1,140 NHL games. Most of those are wrapped up in Karl Alzner’s 682 contests and Christian Folin’s 233 outings. The Rocket rank in the middle of the pack with 120 goals allowed on the season.

Tickets for today’s matchup are available at moosehockey.com or through the Moose Mobile App. Coverage of the game on moosehockey.com/listenlive and AHLTV gets rolling at 1:45 p.m.