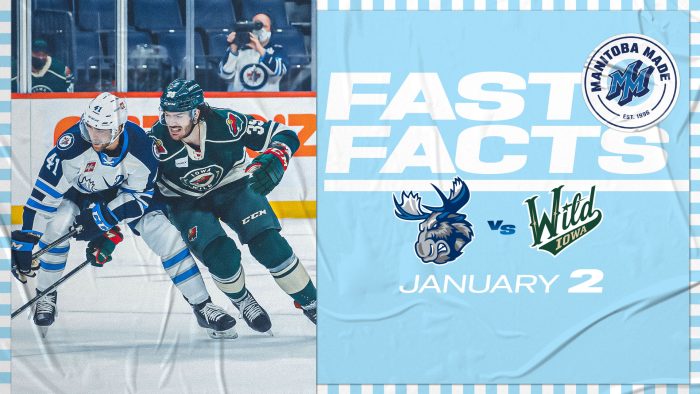 After an extended break over the holidays, the Moose finally get back to action this afternoon against the Iowa Wild. The teams previously met on Dec. 17 in a 4-1 victory for the Wild. Manitoba’s next five games were postponed to finish out 2021. A reminder that today’s game at Canada Life Centre will be played with no fans in attendance. Tune in to the game on CJOB.com/sports, the Manitoba Moose App or AHLTV.com.

As with many teams in the AHL these days, the Moose find their roster in a state of flux. The Winnipeg Jets recalled Kristian Reichel and C.J. Suess on Dec. 26. Both appeared in Winnipeg’s final game before the break on Dec. 19, marking Reichel’s first NHL game and Suess’ second. With the reintroduction of a the temporary taxi squad, the Jets also reassigned defenceman Ville Heinola to the squad on Dec. 27 and back to the Moose on Dec. 28. Forward Mikey Eyssimont was also reassigned from the Moose to the Taxi Squad on Dec. 28. Cole Perfetti, who was playing for Canada at the World Juniors, was recently reassigned to the Jets taxi squad on Dec. 31. The Moose also announced today the recall of goaltender Philippe Desrosiers and signing of netminder Evan Cormier to a professional tryout while Arvid Holm joined the Taxi Squad.

Defenceman Johnathan Kovacevic is in the midst of a productive campaign with the Moose. The Grimsby, Ont. product has 11 points (5G, 6A) in 25 games this season. Kovacevic’s five goals are a new career-high, and his 11 points are only three away from matching his previous season-high of 14 points set in 2020-21. The defender also celebrated a recent milestone by suiting up for his 100th AHL contest on Dec. 17 in Iowa. Kovacevic has 39 points (12G, 27A) in his first 100 outings.

A Year in Review

It was been a tumultuous, but successful year for the Manitoba Moose in 2021. Including the shortened 2020-21 season, the Moose played 61 total games. They went 18-13-3-2 in the Canadian Division and currently stand at 15-9-1-0 this season. Those combined totals stand at an impressive record of 33-22-4-2 for a .590 points percentage in 2021. Cole Perfetti led the Moose in 2021 with 41 points (15G, 26) in 49 games while earning CCM/AHL Rookie of the Month honours in April.  Jeff Malott led the club with 21 goals in 59 games while Perfetti and Cole Maier followed tied for second with 15 tallies. Perfetti led the team  with 26 assists while David Gustafsson was hot on his heels with 21 helpers in 45 games.

Dating all the way back to their IHL days in 1996-97, the Moose have a combined record of 12-8-2-2, plus one tie, in the first game played in the New Year. Their IHL record stood at 3-0-1-1 while their mark in the AHL  is 9-8-1-1. The last time the Moose faced the Wild in this capacity was during the 2015-16 season. That game turned out to be a 4-3 Moose shootout loss. Darren Kramer scored twice and Patrice Cormier added a tally of his own in the narrow loss. Current Winnipeg Jets netminder Eric Comrie ended the contest with 35 saves on 38 shots.

Jeff Malott had an assist on the lone goal in the Moose loss to Iowa on Dec. 17. The forward is up to 13 points (7G, 6A) in 25 games this season with the Moose. His seven goals ties him for the team goal scoring lead. Malott is in the midst of his second season with the club and set a career high in points with 20 (14G, 6A) in 34 games during the 2020-21 season.