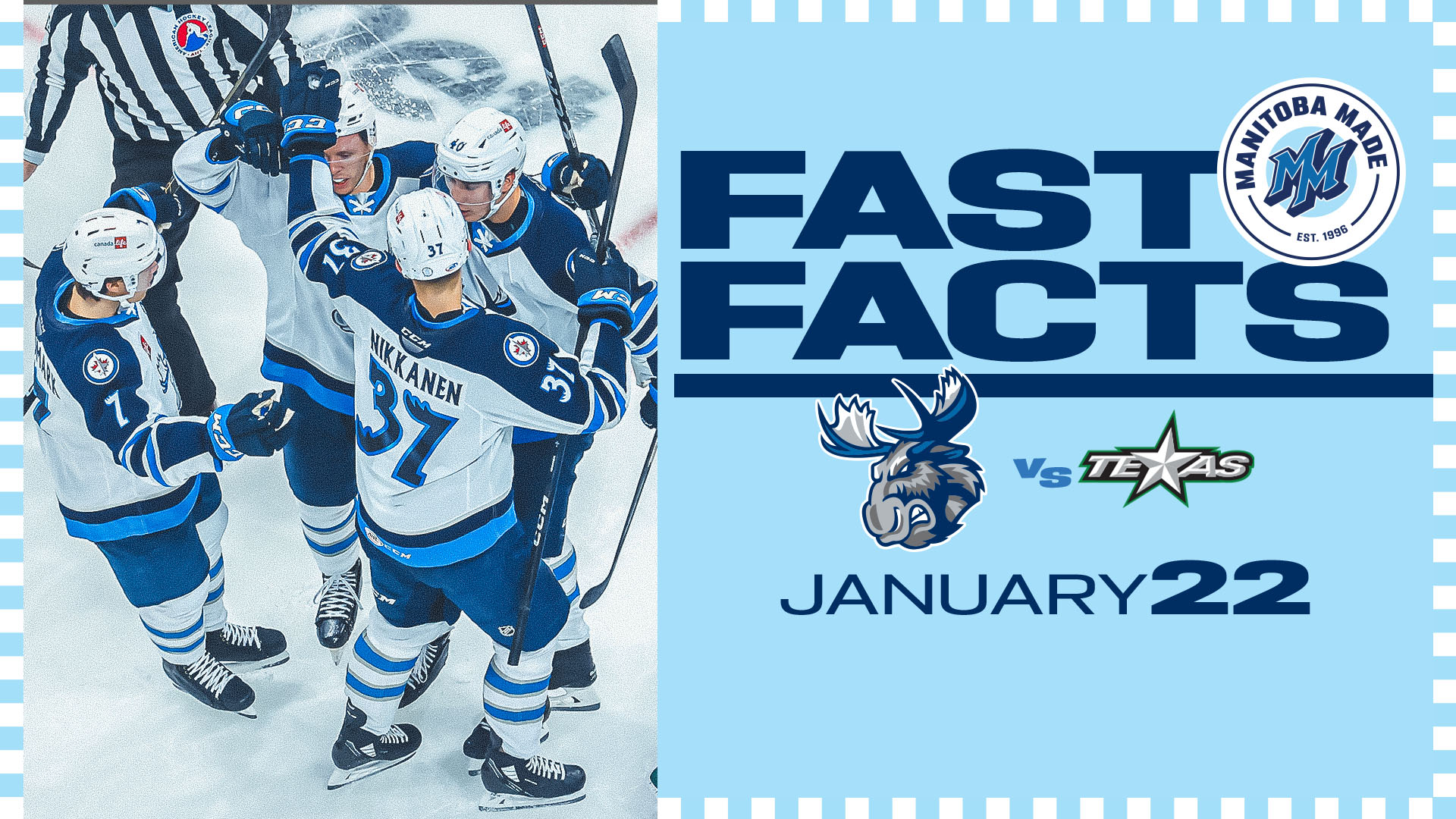 The Manitoba Moose try to make it two in a row over the division-leading Texas Stars when the teams clash today at Canada Life Centre. It’s the sixth meeting of the campaign between the division rivals. The Moose have won three of the first five meetings between the clubs and have points in four of the clashes. Four of the five games have required overtime to find a winner.

It’s Jimmy Oligny Bobblehead Day at Canada Life Centre. The first 3,000 fans through the doors will receive the mini bobblehead of the Moose captain. Tickets for today’s game are available at MooseHockey.com/TICKETS.

Alex Limoges tallied four points (1G, 3A) in yesterday’s overtime victory against Texas. The four-point contest marks the first time the forward has achieved the feat in his professional career. The previous four-point game by a Moose player was Oct. 20/21 when David Gustafsson recorded one goal and three assists. The win also represents the third time this season that Limoges has tallied three assists in a single contest. The Moose won all three of those games. Limoges is now up to 34 points (9G, 25A) in 34 games this season. The forward also sits with 95 total AHL points (43G, 52A) and tallied his 50th career AHL assist in the third period of yesterday’s contest.

Tyler Boland notched the second multi-goal game of his AHL career in the win over Texas. Boland, who was signed to a two-year contract with Manitoba in 2022, is now up to three multi-point outings on the season. The St. John’s, Nfld. product has tallied eight points (5G, 3A) over his past nine contests and has 10 points (5G, 5A) in 18 games overall. In the month of January, Boland is tied for the Moose lead with three goals, tied for second with six points and paces the antlered ones with a plus-four rating.

Rookies on the Rise

Rookies Henri Nikkanen and Dean Stewart both recorded assists in Manitoba’s victory over Texas. Nikkanen, a fourth round pick of the Winnipeg Jets in 2019, hit the 10-point plateau (4G, 6A). The pivot is also currently in the midst of a two-game point streak in which he has tallied a pair of helpers. Stewart’s assist is the defenceman’s ninth of the season, which represents a new career-high. The defender, a seventh round pick of Arizona in 2016, was Manitoba’s second rookie skater to break the 10-point barrier. Stewart has recorded 19 points (2G, 17A) in 52 career AHL games, all with Manitoba.

The Moose and Stars have clashed in five of their eight scheduled meetings so far this season. Four of the six games went past regulation. Manitoba has won three of those contests, 2-1 in overtime (Nov. 6), 4-3 in a shootout (Nov. 19) and 5-4 in overtime (Jan. 21). Texas claimed their own overtime victory, 6-5 on Nov. 18. The Moose hold a record of 6-0-2-1 when requiring extra time. Texas checks in with a mark of 3-0-5-2 when going past regulation. Manitoba has had five different skaters tally an overtime winner this season, while Texas’ only overtime win has come off the stick of Jacob Peterson against Manitoba on Nov. 18/22.

Declan Chisholm tallied two points (1G, 1A) including the overtime winner against Texas on Saturday. The defenceman is now up to 28 points (4G, 24A) in 36 contests. Chisholm, a fifth round pick of Winnipeg in 2018, sits second on the Moose in points and first among Moose blue liners. Chisholm is also tied for first on the squad with 11 power play assists.