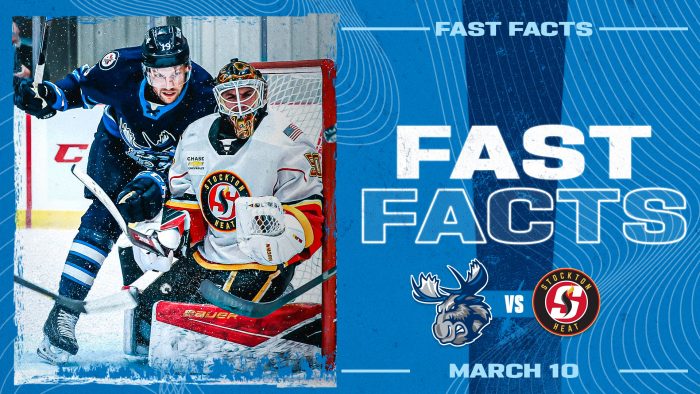 We are in for a fun series of hockey if the first matchup between the Moose and Heat was any indication. The clubs went back-and-forth until Stockton eventually prevailed over Manitoba, 6-5 in overtime. The two teams clash again tonight at Bell MTS Iceplex at 6 p.m. CT. Watch the game live with a subscription to AHLTV or listen on cjob.com/sports and moosehockey.com/listenlive. Coverage begins at 5:45 p.m. CT.

Rookie forward Haralds Egle has recorded a goal in back-to-back contests for the Moose. Egle has appeared in 10 games for Manitoba during the 2020-21 season. Egle posted 32 points (14G, 18A) in 32 games with the Clarkson University Golden Knights during the 2019-20 campaign. The Liepaja, Latvia product paced the Golden Knights in scoring last season. The forward totalled 105 points (44G, 61A) in 135 career NCAA contests.

During Monday’s contest against Stockton, 10 different Moose players etched their mark on the scoresheet. Nathan Todd paced the Moose with three points (2G, 1A), securing the lead spot in league scoring with 16 points (7G, 9A) on the season. C.J. Suess (1G, 1A) and Ville Heinola (2A) also notched two points each during Monday’s game. Haralds Egle (1G), Declan Chisholm (1A), Johnathan Kovacevic (1A), Jimmy Oligny (1A), David Gustafsson (1A) secured a point each. Moose netminder Mikhail Berdin also got in on the action and recorded an assist.

In Monday’s loss against Stockton, Ville Heinola recorded his first career AHL multi-assist game. Heinola posted a helper on Egle’s second period tally and C.J Suess’ third period tally that sent the game to overtime. Heinola has recorded seven points (3G, 4A) during the 2020-21 season. He is currently tied for third among rookie defencemen with seven points (3G, 4A).

Victor Hadfield made his pro debut during Monday’s loss against the Stockton Heat. The Oakville, Ont. product joined the Moose for training camp and was signed to an amateur tryout agreement, Feb. 5. Hadfield notched 26 points (8G, 18A) in 46 games with the Barrie Colts during the 2019-20 campaign. The forward marked an OHL career high in goals, assists and points last season. Hadfield has totalled 33 points (10G, 23A) in 124 career OHL contests.