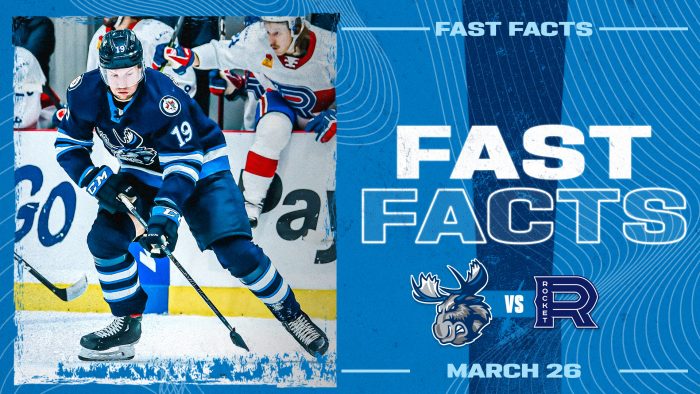 After last night’s thrilling comeback victory, the Moose try for their third straight victory tonight. It’s round two against the Laval Rocket, who are sure to be surly after the Moose snapped Laval’s six-game winning streak. Listen to the rematch on cjob.com/sports and MooseHockey.com/ListenLive or watch with a subscription to AHLTV. Coverage starts at 5:45 p.m. CT with puck drop at 6 p.m. CT.

Return to the Lineup

After missing the last four games due to injury, Leon Gawanke made his return to Manitoba’s lineup on March 25 against Laval. The defenceman  recorded an assist in his return to game action. Gawanke has five assists in 13 games during the 2020-21 season. The Berlin, Germany product has collected 30 points (4G, 26A) in 60 career AHL contests with the Moose.

Atop of the Leader Board

With his first period tally during Manitoba’s 4-3 shootout victory against the Rocket on Thursday, Jeff Malott currently paces all AHL rookies in goals with eight on the season. The forward is also ranked second among first years with three power play goals. Malott has posted nine points (8G, 1A) in 15 games for the Moose this season, ranking second on Manitoba’s current roster in points.

Staying in the Fight

Both of Manitoba’s goals in the final 32 seconds of the contest on Thursday were recorded with an extra attacker on the ice. Manitoba has scored four times during the 2020-21 season with an extra attacker.Tyler Groavac, C.J. Suess, Skyler McKenzie and David Gustafsson have marked a goal each this season when the club was playing six-on-five.The Moose have shown offensive tenacity when trailing after the second period, posting a 2-5-0-0 record. Two victories after trailing heading into the frame ties for second in the AHL.

During Manitoba’s victory against Laval on Thursday, Peter Krieger recorded his first career AHL assist. The forward marked the primary assist on Jeff Malott’s first period tally. The Oakdale, Minn. product has recorded one assist in two games with the Moose, having made his AHL debut March 13 against the Stockton Heat. Krieger kicked off the 2020-21 season with the ECHL’s Indy Fuel where he recorded 16 points (6G, 10A) in 20 games.