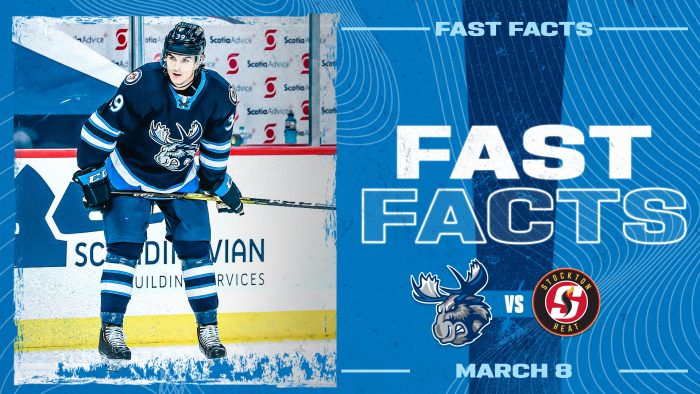 After a successful eight-game road swing, the Moose return to Winnipeg and will stay put for the next 17 games. The team hosts the Stockton Heat tonight at Bell MTS Iceplex to begin the lengthy home stand. Watch the action live with a subscription to AHLTV or tune in on cjob.com/sports and MooseHockey.com/LISTENLIVE.

A Night To Remember

The Moose are gaining four players who have completed their quarantine period and are ready to join the club. Manitoba announced the club signed forwards Kamerin Nault and Peter Krieger (Feb. 19) and defenceman Adam Brubacher (Feb. 21) to professional tryouts. Nault has three assists in 13 games split between the ECHL’s Kansas City Mavericks and Greenville Swamp Rabbits this season. Krieger has 16 points (6G, 10A) in 20 games with the ECHL’s Indy Fuel during the 2020-21 season. Brubacher posted 28 points (4G, 24A) in 36 games while captaining the RIT Tigers during the 2019-20 season. Comrie was claimed off waivers by the Winnipeg Jets from the New Jersey Devils on Feb. 18 and was assigned to the Moose on March 5.

Haralds Egle marked his first career AHL goal in Saturday’s contest against the Senators. With 42 seconds remaining in regulation, Egle scored on a power play opportunity. Egle has appeared in nine games for the Moose this season. The forward kicked off the 2020-21 season with the Miskolci DVTK Polar Bears (Slovak) where he recorded 17 points (6G, 11A) in 18 contests.

Top of the Charts