Fast Facts: Moose at Belleville – May 11 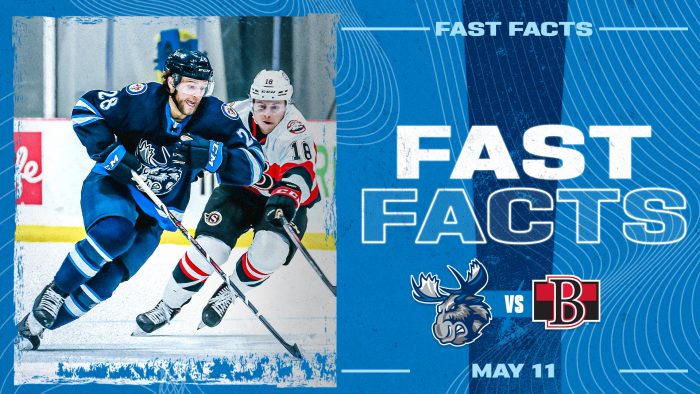 With a three-game series sweep of the Toronto Marlies behind them, the Manitoba Moose look toward their final set of the season. The Moose face off against the Belleville Senators for the next four games. Manitoba rides a five-game winning streak and 11-game point streak into the contest. You can listen in on cjob.com/sports and MooseHockey.com/LISTENLIVE or watch with a subscription to AHLTV.

Forward David Gustafsson has factored into the winning tally in three of Manitoba’s past four games. Gustafsson scored the overtime winner in a 2-1 victory over Stockton on April 29. He followed that up with the shootout winner in a 5-4 triumph in Toronto on Saturday. Gustafsson then cashes in for the winner in regulation in the third period Sunday’s 4-3 Moose win against the Marlies. Three of Gustafsson’s six goals this season were registered as the game-winning tally. His three game-winners lead the Moose this season. Overall, the Winnipeg Jets second round pick has 17 points (6G, 11A) in 18 games on the campaign.

Forward Nathan Todd was in on three of Manitoba’s four goals on Sunday. The club’s leading scorer had the primary assist on two goals, including Gustafsson’s winner, and added his 10th goal of the season. The three-point afternoon was Todd’s__ such outing of the season. Todd leads the Moose with__ multi-point games. The Ottawa, Ont. product is the second Moose player to hit double-digits in the goal column this season. He leads the team with 19 assists and 29 points in 32 games. His__ primary assists also lead the team.

While on their 11-game point streak the Moose have seen contributions from all through the lineup. For example, over the past three games the Moose got goals from six players scoring their third, or less, goal of the campaign. That includes four players scoring their first goals of the season. During their series against Toronto the Moose saw 11 players record a point on May 6, nine players find the scoresheet on May 8 and seven tally a point on May 9. During those contests the Moose never had less than 14 skaters record at least a shot on goal.

Defenceman Dylan Samberg has points in each of his last three games. Samberg scored his first professional goal on May 6 in Toronto and added assists on May 8 and 9. The rookie defender has five points (1G, 4A) in his last eight games while totalling 17 shots on goal during that span.