Fast Facts: Moose at Toronto – May 8 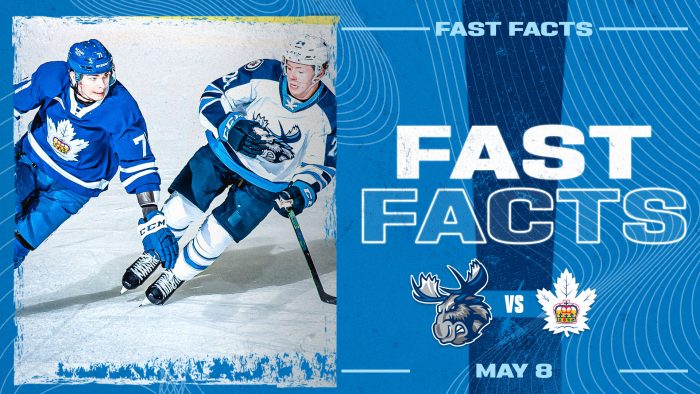 The Moose eye-up a double-digit point streak this afternoon in Toronto. Manitoba grabbed a 5-3 win in the opening game of its road swing to run the current point streak to nine games. It’s the longest active streak in the league. Listen in to the matchup against the Marlies on cjob.com/sports and MooseHockey.com/LISTENLIVE or watch with a subscription to AHLTV. For viewers in the U.S., NHL Network will also carry the game.

Forward Nicholas Jones suited up for this 100th AHL game on Thursday. The Edmonton, Alta. native celebrated the milestone with a career afternoon, racking up three assists in the victory. It was Jones first multi-point game of the season and sixth of his career. The three-assist outing represents a new single-game career high for assists and points. Jones was also a plus-three rating in the contest. This season, Jones has nine points (2G, 7A) in 29 games with the Moose. In his first 100 AHL games, Jones recorded 31 points (13G, 18A).

Goaltender Cole Kehler stopped all seven shots he faced on Thursday to collect his second win of the season. Kehler appeared in 21:42 of the contest in relief of Mikhail Berdin. It’s the second time this season the Altona, Man. product has picked up a win after not starting the game. In fact, Kehler has two wins to his name before actually making an AHL start. In 70 minutes of action over three career appearances, Kehler holds a 1.71 goals-against average and a .913 save percentage.

Check Off Number One

Two Moose players recorded their first professional goals in Thursday’s victory. First up, Ty Pelton-Byce struck in the first period for his first pro goal and point. Pelton-Byce achieved the milestone in his fifth game and on his eighth shot of the season. The former Wisconsin Badger has recorded a shot on goal in all five of his games with the Moose. Dylan Samberg tallied in the second period in his 26th career game on his 34th shot of the campaign. The University of Minnesota-Duluth product has four points (1G, 3A) on the season.

Nelson Nogier’s tally with 47.1 seconds left in the second period held up as the game-winner on Thursday. The goal was Nogier’s first of the season, coming in his sixth game with the Moose, after spending the bulk of the campaign with the Winnipeg Jets Taxi Squad. The tally came 444 days after his previous goal on Feb. 17/2020, but just 12 games separated the two goals. The marker was the first game-winning goal of Nogier’s career. The Saskatoon, Sask. product has two points (1G, 1A) in his six games with the Moose this season.

Forward Peter Krieger tallied a pair of assists in Manitoba’s win on Thursday. It was the first time Krieger recorded multiple assists and points in an AHL game. The 27-year old has three assists in his last two outings. Krieger has five points (1G, 4A) in nine games since joining the Moose midway through the campaign. The Oakdale, Minn. product posted 16 points (6G, 10A) in 20 games with the Indy Fuel to start the season.