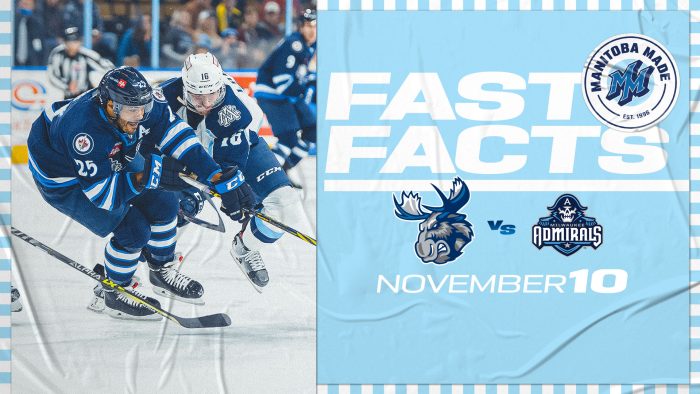 The Moose are in Milwaukee for a rematch with the Admirals following a couple much-needed days off game action. Manitoba went 1-1-1 through a three games in three nights gauntlet over the weekend. Now the Moose look for a good start to the second half of this six-game road swing. Coverage of tonight’s matchup against the Admirals begins at 6:45 p.m. CT on CJOB.com/sports, MooseHockey.com/LISTENLIVE and AHLTV.com.

The Manitoba Moose put their penalty kill on full display during their three games this past weekend. Facing their first three-in-three this season, Manitoba was shorthanded a total of 12 times. The squad killed off all 12 of those attempts and even added a shorthanded goal to boot. The Moose currently sit with a top-five penalty kill in the AHL and have allowed four goals over their first ten games. That’s good for an 87.5% success rate to open the season.

Forward Jeff Malott checked in with his first goal of the season in the narrow loss over Rockford this past Sunday. The Burlington, Ont. native has two points (1G, 1A) in his last two contests and has recorded four points (1G, 3A) total over the 10 games he’s suited up in. During the 2020-21 season, Malott led the Moose in goals with 14 and was third overall with 26 points (14G, 6A) in 34 games. That mark of 14 goals was also good for a tie for ninth place in AHL goal scoring, and second among rookie scorers. After playing for the Moose on an AHL contract last season, Malott signed his first NHL deal with the Winnipeg Jets over the off-season.

Moose defenceman Ville Heinola has been on a tear since his return from injury over the weekend. Heinola finished off the three-game weekend set with four assists and is now tied with David Gustafsson for the team lead with seven points each. The Finnish defender really got his feet wet in the AHL last year when he put up 11 points (4G, 7A) in 19 games. Heinola is a former first round pick of the Winnipeg Jets and was selected in the first round, 20th overall, by the organization in the 2019 NHL Entry Draft.

Tuesday saw the Winnipeg Jets recall forward Kristian Vesalainen from the Moose. At the same time the NHL club reassigned goaltender Mikhail Berdin to Manitoba. Vesalainen suited up for three Moose games this season and scored his first goal of the campaign in the 5-1 win over Chicago on Saturday night. Berdin owns a 3-3-0 record with the Moose this season. The Russian netminder has also recorded a 2.69 goals-against average and a .893 save percentage to go along with two shutouts in his first six games.

Forward Evan Polei checked in with his first goal in antlers in the narrow loss over Rockford. The Wetaskiwin, Alta. native has three points (1G, 2A) in his first ten games for the Moose. Polei’s AHL career high in points came in the 2018-19 campaign with the Bakersfield Condors. The forward recorded 20 points (9G, 11A) in 53 games played.