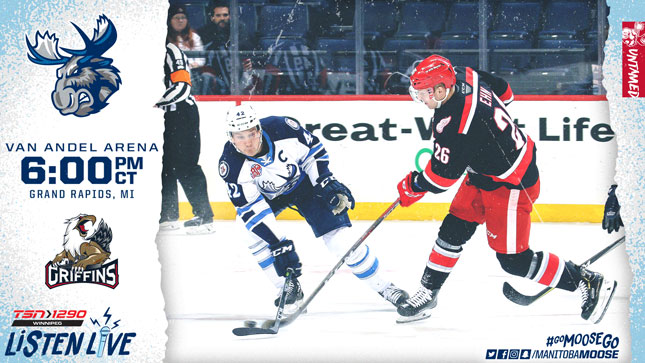 The Manitoba Moose (8-7-0-0) play the Grand Rapids Griffins (7-7-1-1) for the third time in five games tonight at 6 p.m. CT. It’ll be the first time Manitoba returns to Van Andel Arena since eliminating the Griffins there last season in the Central Division Semi-Finals of the Calder Cup Playoffs. You can tune into the game on TSN 1290, the Moose App, moosehockey.com/listenlive, or stream it live on AHLTV with the pregame show starting 15 minutes before puck drop.

The Moose are coming off a wild 5-4 victory over the Texas Stars on Wednesday night.  The win was powered by a three-goal second period. The eventual game winner came from rookie Skyler McKenzie finishing off a beautiful passing play by Emile Poirier and Michael Spacek.

McKenzie was quick to focus on the teams better play in their own zone despite the high-scoring affair.

“It was a really good game all around for us. I thought we competed a lot harder; we were a lot better in the defensive zone. It was a little bit scary there at the end, but we found a way to come out with the two points.”

Logan Shaw, in just his second game with the club, scored twice and registered an assist, all in a span of seven minutes and eight seconds. His linemate in that game, JC Lipon, enjoyed having the steady veteran presence down the middle of the ice.

“He’s a veteran guy. He’s kind of been around for the same amount of time I have, and he’s got some time up in the NHL, so he’s obviously been doing the right things. It’s really helpful to have a centreman that’s in the right spots and is the first guy back.”

Tonight’s game will seem very familiar after the teams split two meetings just over a week ago in Winnipeg.  The Griffins won game one 4-1 (Nov. 8) and the Moose took the rematch 6-2 (Nov. 10).

According to McKenzie there are no surprises among the Central Division rivals.

“Now you know what to expect. We had two games, back-to-back against them so we know what we’re going into. We know what we have to do and we just have to capitalize on the chances we get. They’re a quick team so we can’t play into their hands.”

The Griffins’ Chris Terry scored three times in those two game, while Mason Appleton led the Moose against Grand Rapids with three points (1G, 2A). Logan Stanley has been eating up minutes for Manitoba lately and could key into tonight’s game as well.  The rookie defender has three points (1G, 2A) in his last four outings, and is tops on the team with a plus-six rating.

The Moose wrap up their road swing in Chicago tomorrow afternoon at 3 p.m. CT against the Wolves. Next they’ll play a two-game set against the Iowa Wild at Bell MTS Place. That series starts Friday (Nov. 23) at 6 p.m. CT, and wraps up with the team’s Hockey Fights Cancer game in support of Camp Quality on Saturday (Nov. 24) at 2 p.m. CT. Head to moosehockey.com/tickets for tickets.