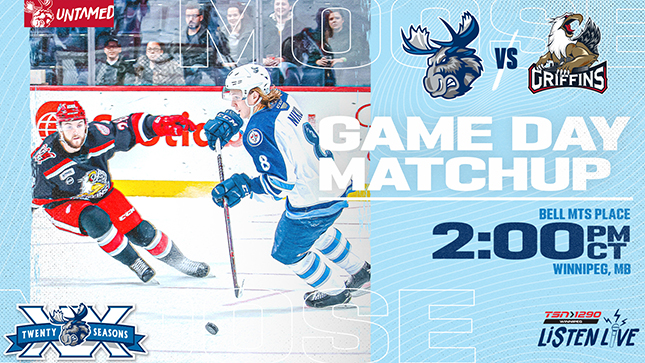 After a difficult start to the season, the Moose look to put October behind them. The club hopes to take the lessons learned through a 1-7-0-0 month and turn them into stronger results in a much busier November. Yes, things certainly pick up for the Moose this month. Their game total jumps from eight to 15 from month-to-month, and those 15 games come in a span of 29 days. Not to mention nine of them coming on the road. So home games like this weekend set against the Grand Rapids Griffins will prove valuable.

The Moose come into the contest seeking their first win on home ice after falling to the Toronto Marlies and Iowa Wild during their first home stand. While the team and its coaching staff feel like they played well enough to earn points on that stand, they weren’t able to convert. It was a similar theme in Grand Rapids and Chicago last weekend. The club outshot its opposition to the tune of 62-40, but was only able to record one goal in two games.

Offence continues to be a challenge for the Moose, having scored just 15 goals in eight games. This week’s roster moves could both help and hinder their efforts offensively. The club saw two key forwards in Logan Shaw and C.J. Suess head up to the Winnipeg Jets. Not ideal for the club as it tries to get the offensive engine rolling. However, the team adds some offensive ability on the back end with Sami Niku and 2019 Jets first rounder Ville Heinola jumping into the fray. The two Finnish defenders will certainly help the Moose in transition and provide a significant offensive boost to the blue line.

“Very talented, young player. Lots of deception in his game,” Vincent explained after yesterday’s skate. “So he’s going one way, and you think he’s going to keep going that way, but he turns and he goes the other way. Even offensively, he’s looking one side and he’s going to pass the puck on the tape on the other side.”

With Suess and Shaw skating for the big club, the Moose added some depth to the lineup this week. The team signed forwards Brent Pedersen and Nathan Todd to professional tryouts. Pedersen is familiar with the Moose systems, seeing as he played 29 games for the team last season. He also attended training camp with the Moose this year. Todd is a fresh face for the organization. He posted 60 points (30G, 30A) in 71 games with the ECHL’s Brampton Beast last season. He’s off to a strong start in 2019-20, with 10 points (4G, 6A) in seven games with Brampton.

So it will be up to this new-look Moose squad to pick up a couple points against the Griffins today at Bell MTS Place. Grand Rapids saw some recent additions back into its lineup with Evgeny Svechnikov and Givani Smith returning from Detroit. The pair add to an already talented, if youthful, group for Grand Rapids. Svechnikov’s return brings the Griffins’ total to five recent Red Wings first rounders skating with the team.

A couple of milestones of note in tonight’s game. JC Lipon is slated to play his 400th AHL game. All of them have been with Winnipeg Jets affiliates. Sami Niku is also scheduled to play his 100th AHL contest.

Don’t forget it’s also Hockey Fights Cancer this afternoon. Stop by the booth on the concourse and purchase an autographed mystery puck in support of Camp Quality. Not a fan of surprises? Guarantee which player signed your puck by purchasing through the ‘Moose Auctions’ portal on the Moose App. Tickets for tomorrow’s game are available at moosehockey.com/tickets.