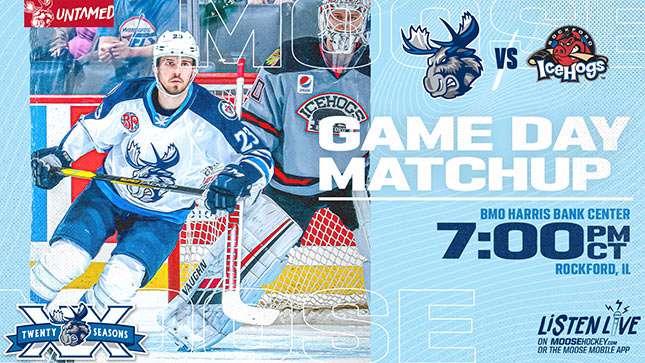 For the first time this season, the Moose and Rockford IceHogs face off. With tonight’s game, the Moose have faced all of their central division rivals at least once. Manitoba won three of the four games between the two clubs last season, and earned points in all four.

After a 2-5-0-0 start to the season, the IceHogs have won four straight games to get themselves back above the .500 mark at 6-5-0-0. Rockford is coming off a 3-1 win over the Toronto Marlies and was the first team to hand Toronto a regulation loss this season. The hosts this evening hold a 5-2-0-0 record at BMO Harris Bank Centre and will be a tough out.

The Moose have started the process of getting their season back on track. Two wins over the weekend against Grand Rapids put a much needed four points on the board. However, Wednesday’s setback in Milwaukee left the team in familiar territory. They did plenty of things well throughout the game, but costly mistakes ended up turning the tide against the Moose. Manitoba owned three leads in the game, but each time it seemed an avoidable situation resulted in the Admirals tying the game. Then the floodgates opened and Milwaukee built itself a three-goal lead and tough spot for the Moose to try and climb out of. The result of which was certainly frustrating for the Moose.

“Every mistake we had it felt like they scored on, they capitalized on it, and when they made a mistake we couldn’t find a way to put the puck in the net,” commented forward Seth Griffith. “It does get frustrating, but it would be more frustrating if we weren’t getting our chances and our opportunities to score. The mistakes we made are mistakes that are easy to fix. So we are confident as a group that we will rebound (Friday).”

The Moose came out on top of the special teams battle on Wednesday. A bright spot to be sure. The power play stayed red hot, scoring its fifth goal in the last three games. The penalty kill chipped in with Manitoba’s second shorthanded tally of the season. That came off an impressive effort by C.J. Suess to score with the Moose facing a two-man disadvantage.

Manitoba seems to have the offensive side of the game sorted out. After scoring 15 goals in the first eight games of the season, the Moose have 16 goals in their past three games. On top of the power play contributing, Griffith is back on his game. The 2018-19 Moose scoring leader didn’t feel like he was at full speed through the first number of games. Now with seven points (5G, 2A) in his last three outings, Griffith has some momentum going.

“I think I’m just starting to get my game back. Bit of a slow start and I’m starting to pick up again,” said Griffith. “I expect that from myself each and every game. So hopefully I can just keep working hard and continue to prove myself.”

Now the challenge for the Moose is to reel in the goals-against column. The guys in antlers have allowed 43 goals in 11 games, just shy of four goals per game. Moose head coach Pascal Vincent feels the defensive structure is right, and the team is down to cleaning up individual errors.

“Our routes are good. The goals we have been giving up recently are more one individual mistake,” Vincent explained. “Someone losing his guy, one-on-one battles. These are the things we can work on individually with the players and it’s going to come over time.”

The Moose lineup will have a bit of a different look this evening as Joona Luoto was recalled from the club following Wednesday’s game and defenceman Ville Heinola was reassigned from the Moose back to his Finnish club team.

The Moose and IceHogs clash at 7 p.m. today in Rockford. Tune into the game on moosehockey.com/listenlive, the Moose App and watch the game on AHLTV. Coverage starts at 6:45 p.m. with the pre-game show.