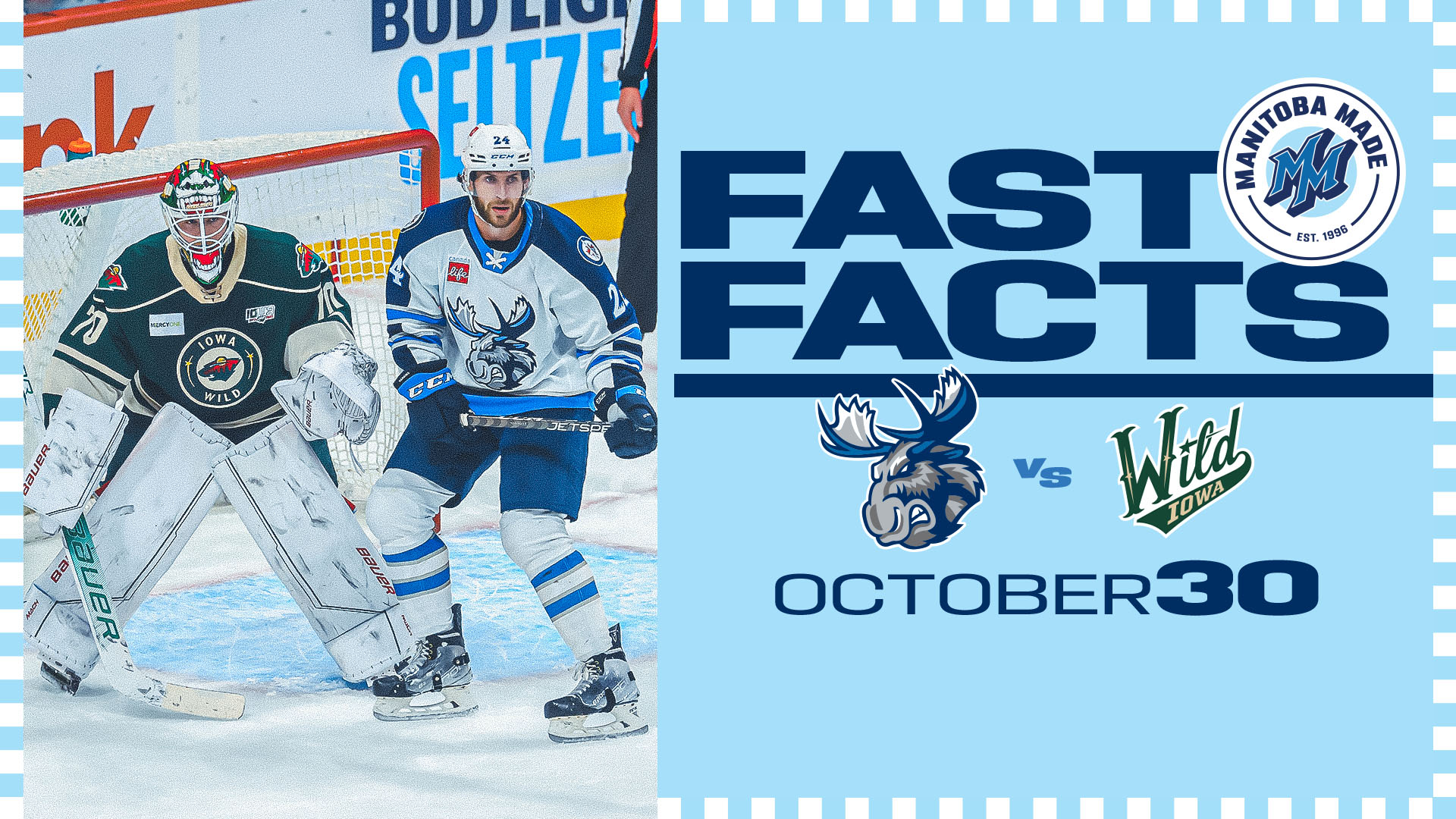 The Moose suffered their first regulation defeat yesterday, 5-2, at the hands of the Iowa Wild. After getting tricked by the Wild, the Moose will try to treat themselves to two points in the rematch. It’s the Halloween Game at Canada Life Centre, so be sure to wear your spooky best for the costume contest. There’s also trick-or-treating on the concourse. Tickets for today’s 2 p.m. matinee tilt are available at MooseHockey.com/TICKETS.

Forward Kevin Stenlund recorded a power play marker in Manitoba’s loss against the Iowa Wild. Stenlund, who was drafted in the second round by the Columbus Blue Jackets in 2015, has recorded at least one point in every game he’s suited up for this season. The Stockholm, Sweden product has registered six points (3G, 3A) and has scored a power play tally in each of his past two contests. The forward is currently rocking a career-best 27.3 shooting percentage through his first five games in antlers. Stenlund is closing in on 150 AHL games played in his career, currently sitting at 146, and has suited up for the Moose as well as the Cleveland Monsters.

Ville Heinola is currently on his first point streak of the season. The defenceman has registered three assists his past two contests and sits with four helpers through six Moose games over the 2022-23 campaign. The Honkajoki, Finland native is also tops on the squad with a plus-six rating. Heinola is closing in on 50 career AHL points appearing on the scoresheet 42 (9G, 33A) times in 69 games all with Manitoba. Last spring gave the defender his first taste of AHL playoff action and the former Jets first round pick responded with five points (1G, 4A)  in five contests.

Declan Chisholm kept his point streak alive with an assist in Manitoba’s loss against Iowa. The defenceman, who was drafted by Winnipeg in the fifth round in 2018, is in the middle of a five-game point streak that has seen him tally six points (2G, 4A) in as many contests. The Bowmanville, Ont. native has recorded both tallies on the power play and has one game-winning tally under his belt this season. With the assist in yesterday’s game, Chisholm now stands with 49 career AHL points  consisting of (13G, 36A) and is 13 games away from 100 in his Moose career. Chisholm also had seven points (2G, 5A) in five playoff games this past spring as well as a plus-six rating.

The Boys Bounce Back

The Moose suffered their first regulation loss of the 2022-23 campaign yesterday afternoon. Following their first loss of the season, a 5-4 overtime defeat on Oct. 15, the Moose won four straight games. During the 2021-22 season, Manitoba posted a 21-7-3-0 record after losses. The Moose only had seven segments of consecutive losses during 2021-22 season and didn’t lose more than three games in a row.

Jansen Harkins is currently in the midst of a five-game point streak that has seen the forward tally eight points (5G, 3A). Harkins, the Winnipeg Jets second round pick in 2015, has scored a goal in five straight games and leads the team in both goals and points early this season. Harkins currently has 90 points (32G, 58A) in 161 AHL contests.