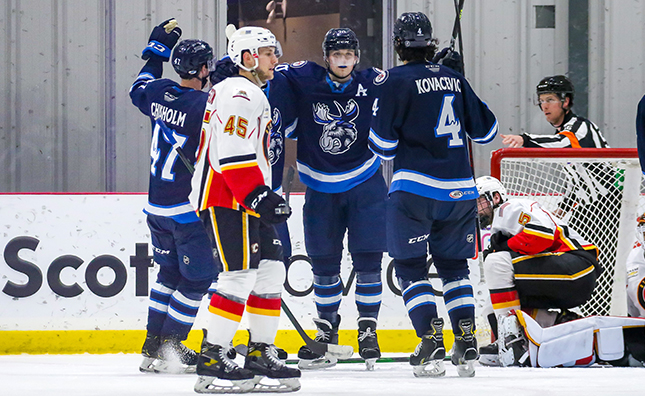 Game Story
The Manitoba Moose (15-11-2-1) claimed a 2-1 overtime victory against the Stockton Heat (11-17-2-0) on Thursday night at Bell MTS Iceplex. The first period remained scoreless however both clubs found opportunities to get on the board. The Moose earned a man-advantage at 4:53 of the first period while the Heat were awarded two power play chances of their own. On Stockton’s second power play, Matthew Phillips found a breakaway opportunity. Phillips ripped a shot off Moose netminder Mikhail Berdin’s face mask and Stockton was held off the scoresheet.

Manitoba put on the pressure during the second period and outshot the Heat by a 15-5 margin.  With 4:45 remaining in the middle frame, Johnathan Kovacevic set up Kristian Reichel who was posted in front of Stockton’s goaltender Andrew Shortridge. Reichel couldn’t capitalize on his attempt, but Bobby Lynch was waiting on the doorstep and netted the rebound giving the Moose the 1-0 lead.

At 8:49 of the third period on a Moose power play opportunity, Stockton broke out on a three-on-one into Manitoba’s zone. Luke Philp flipped a backhand pass to Eetu Tuulola rushing down the middle for a shorthanded goal to tie the game 1-1. The clubs exchanged a combined 16 shots during the final frame however neither club found the go-ahead tally in regulation.

During extra time Berdin was tested with three shots, but denied the Heat push to take the game, notably with a poke-check on a Phillips attempt. At 3:15 of overtime, David Gustafsson took matters into his own hands and powered his way around Adam Ruzicka on his way to a highlight-reel goal. Manitoba stamped the 2-1 victory and earned their seventh win in eight games.

Quotable
Head Coach Pascal Vincent (Click for full interview)
“What you see on the ice and the way our team is playing, it’s a true reflection of the people we have in the room. They care about each other, they care about the jersey they are wearing, they love playing the game and they play the right way. The people that we have on this team are the exact reflection of what we see on the ice.”

Moose forward Joona Luoto (Click for full interview)
“It’s always so fun to come to the rink. The guys practice hard and the result comes when we are playing. So there’s nothing more I can say about that, just we are having so much fun playing and we are playing so good.”

What’s Next?
The Moose hit the road to take on the Toronto Marlies at Coca-Cola Coliseum on Thursday, May 6. Puck drop is scheduled for 6 p.m. The game is available on MooseHockey.com/LISTENLIVE, CJOB.com/sports and AHLTV.com.