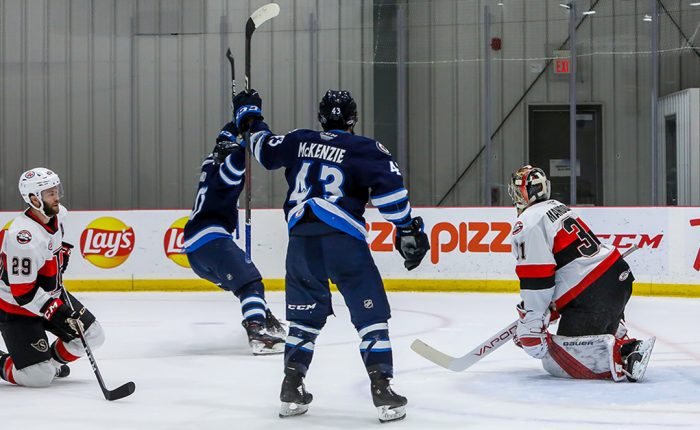 Game Story
The Manitoba Moose (9-11-2-0) claimed an 8-5 victory against the Belleville Senators (7-11-0-0) on Thursday night at Bell MTS Iceplex. Both clubs jumped out of the gate offensively and exchanged five goals on 37 shots in the first frame alone. Egor Sokolov opened the scoring 3:51 into the frame and gave Belleville the 1-0 lead. Just under a minute later, Marko Dano won a puck battle behind the net and found Skyler McKenzie who tied the game 1-1. Midway through the period on a Senators power play opportunity, Matthew Peca netted Vitaly Abramov’s rebound and Belleville regained the one-goal lead. With 3:46 to go in the first, Cole Perfetti’s patience paid off as he timed his pass from the wall perfectly to find Marko Dano streaking up the middle. Dano made no mistake on his opportunity and ripped a shot past Belleville’s netminder Kevin Mandolese and tied the game again 2-2. With 48 seconds remaining in the period, Joseph LaBate scored to earn the 3-2 advantage in favour of the Senators.

At 31 seconds of the second period, Sokolov scored his second of the game and improved Belleville’s lead to a 4-2 count. Just 31 seconds later, C.J. Suess cashed in on a loose puck and got the Moose within one. At 6:11 of the second frame, Johnathan Kovacevic ripped a pass from the blueline that found Skyler McKenzie down low, who powered the puck behind Mandolese to tie the game 4-4. With 4:03 remaining in the second period, Angus Crookshank scored on a breakaway opportunity and found the one-goal lead for the Senators.

At 3:07 of the third period, Adam Brubacher created space near the blueline and his wrister redirected into the net to tie the game. Just over three minutes later, Cole Maier and Nicholas Jones earned a two-on-one opportunity shorthanded and Jones tipped in Maier’s pass to give the Moose the one-goal lead with 6:08 off the clock in the third period. Jeff Malott was awarded a penalty shot with 7:35 to go in the third. The forward took advantage with a wicked wrister to give Manitoba a 7-5 lead. With 44 seconds remaining, Kristian Reichel found Belleville’s empty net to lock down Manitoba’s 8-5 victory.

Quotable
Head Coach Pascal Vincent (Click for full interview)
“There was a lot of good things. Again, our third period we were managing the game really well. We started the game on a good note. We were playing right, right from the get go. We needed to adjust how we managed the puck, especially in the second period. We needed to make plays, we want to be creative but there’s a time and a place. I thought having that balance between creating offence but also being responsible defensively, it’s a thin line and it takes experience and we adjusted extremely well in the third period.”

Goaltender Cole Kehler (Click for full interview)
“You get the opportunity to go in the game and you know, it’s exciting. It’s something that, we all want to compete, we all want to play and obviously, I think it’s been over 13 months now since I’ve had privilege. It was just fun to be back out there and get a feel for the game and a feel for the pace out there and kind of feel that compete level again. It was awesome. You can’t really ask for a much better effort out of the guys in front of me. They really locked it down and made my job really simple out there. It was an awesome feeling.”

What’s Next?
The Moose take on the Belleville Senators on Saturday at Bell MTS Iceplex. Puck drop is scheduled for 2 p.m. The game is available on MooseHockey.com/LISTENLIVE, CJOB.com/sports and AHLTV.com.