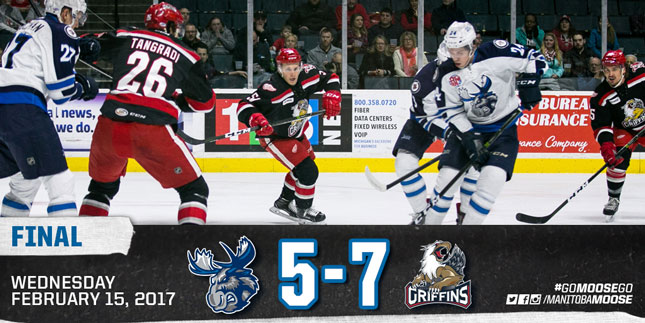 Game Story
The Manitoba Moose (19-24-3-3) and Grand Rapids Griffins (32-14-1-2) matched up in an early affair at Van Andel Arena on Wednesday.  Granted an early five-on-three opportunity, the Moose got the scoring under way when Jack Roslovic used a backhand pass to set up Chase De Leo for the opening marker.  The powerplay goal came 8:24 into the period. The Griffins pulled even moments after a Moose penalty expired.  Egeny Svechnikov redirected a Joe Hicketts shot to the back of the net at 15:12. Grand Rapids took the lead on their second powerplay of the period when Eric Tangradi tipped a Tyler Bertuzzi shot by Eric Comrie with 1:07 left in the first for the 2-1 advantage.

Only 13 seconds ticked off the clock before Patrice Cormier got Manitoba on even footing.  Nelson Nogier let a shot go from the point and Cormier deflected the puck past Eddie Pasquale.  The Moose regained the lead at 9:47 of the period when Scott Glennie banged in a Jack Roslovic rebound on the powerplay to put the score to 3-2 in Manitoba’s favour.  Grand Rapids tied the game on an unfortunate bounce for the Moose with 6:24 left in the frame.  Matthew Ford sent the puck around the boards and as Comrie departed the net to play the puck, it kicked from the corner and out in front of the net for Kyle Criscuolo to tap in the 3-3 goal.

The 3-3 score held through half the third until Grand Rapids broke the game open in the latter stages.  The Griffins powerplay struck for its second of the day at 10:08 when Tyler Bertuzzi snuck a shot through off the rush.  Just 23 seconds later, Criscuolo went cross-crease for Drew Miller who made no mistake in adding to the Grand Rapids lead.  The Griffins used their powerplay again to push the score to 6-3 at 13:34.  Eric Tangradi found a loose puck in front and flipped it up under the bar to put Grand Rapids in full control.  The Moose made things interesting with less than three minutes left.  Patrice Cormier gathered in his own rebound and snapped a shot up high to get Manitoba back within a 6-4 score.  With the Moose net empty, Mitch Callahan launched the puck down the ice and hit pay-dirt to restore the Griffins’ three goal lead.  Manitoba got one back with 26 seconds remaining as Jimmy Lodge tallied his eighth of the season in the 7-5 loss.

What’s Next?
The Moose cross the border back into Canada to take on the Toronto Marlies in a back-to-back set on Friday (6 p.m. CT) and Saturday (2 p.m. CT).  Tune in to Friday’s game on TSN 1290 and moosehockey.com/listenlive starting 15 minutes before puck drop.