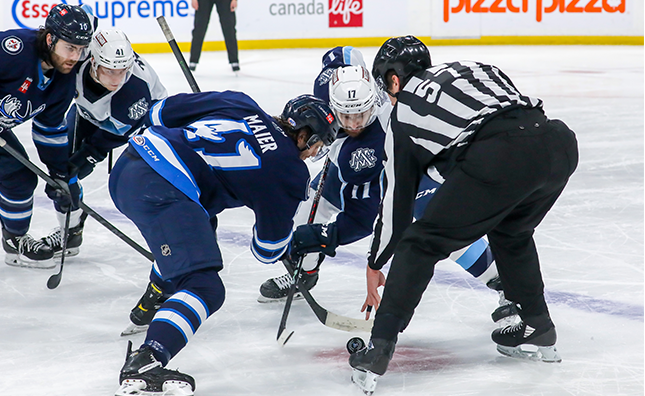 The Manitoba Moose (2-3) clashed with the Milwaukee Admirals (3-2) in Game 5 of their Central Division Semifinals series Sunday afternoon at Canada Life Centre. The Moose were coming off a 7-3 win in Game 4 on Friday.

Milwaukee opened the scoring in the first. Mikhail Berdin made the save off a hard shot from Cole Schneider. The rebound popped free to the side of the net and Jusso Parssinen slid the puck home on his backhand for a 1-0 Admirals lead. Neither side could find twine the rest of the way through the period, as Milwaukee took a 1-0 lead into the first intermission and was ahead 13-4 in shots.

Milwaukee added to its lead with a power play marker 90 seconds into the middle period. Tommy Novak fired the puck through traffic for his first tally of the series. The Moose countered on a power play of their own. Ville Heinola found Morgan Barron, who snapped the puck low through traffic and past Ingram to put the Moose on the board 2-1. That was all the scoring in the second. Manitoba trailed 2-1 after 40 minutes of play, despite outshooting Milwaukee 10-4 in the middle stanza.

The Moose needed a goal in the third frame, but were unable solve Ingram. The home side made a push and outshot the Admirals by a count of 14-4 in the final 20 minutes, but couldn’t tie the contest. Berdin took the loss and ended the game with 19 saves, while Ingram captured the win and made 27 stops of his own.

“There’s nothing really to say. We’re very proud of the effort the guys put in this year. It wasn’t only in the playoffs, we battled all year. We won some games the ugly way a couple times. The new guys that are going to come in next year, they know that once they put on that jersey they gotta work. They gotta follow the group. There wasn’t one single guy that was only relying on skill. Everybody was working from the first line to fourth and all three pairings.  I’m very proud of everybody and how we battled all year.”