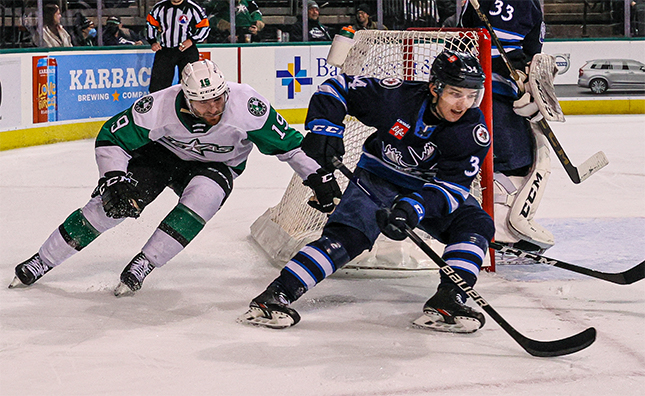 Manitoba got the scoring started for the seventh consecutive contest. With just over a minute remaining in the first, Greg Meireles won an offensive zone draw and sent the puck to Todd Burgess. The forward shifted and wired a shot from the dot over the glove of Anton Khudobin for the 1-0 Moose lead. Evan Cormier continued his spectacular play and made a few incredible saves on his 11 total stops through the first 20 minutes. Khudobin finished the frame with 13 saves of his own.

The Moose momentum carried over to the beginning of the second frame with a goal from Luke Johnson. Jeff Malott grabbed the puck and shot high on Khudobin. The netminder made the initial stop but the puck rolled up and over his shoulder where Johnson was waiting to bury the rebound for a 2-0 lead 31 seconds in. The Stars fired back with a shorthanded goal from Josh Melnick. That tally cut the Moose lead in half just past the five minute mark. The Moose ran into some penalty trouble and the Stars converted with a goal from Anthony Louis. That tally tied the game 2-2 late in the second. Despite the Moose outshooting the Stars 10-7 in the middle frame, the two teams were even 2-2 after 40 minutes of play.

The third period saw the Stars take the lead with another power play marker off the stick of Louis. His second of the contest put Texas ahead 3-2. Manitoba fired back with a pair of goals 1:15 apart to restore their lead. The first came on the power play from Isaac Johnson. The forward’s first AHL goal tied the game 3-3. The second tally came off a long wrist shot from Cole Maier to give Manitoba the go-ahead marker. The Stars tied the contest with 61 seconds left as Louis completed the hat-trick with the extra attacker on the ice. Not to be outdone, the Moose converted the winning tally with less than second on the clock. Haralds Egle spun and fired the puck on net and past Khudobin to cap off a wild final period and give the Moose the 5-4 victory. Cormier ended the night with the win on the back of 21 saves. Khudobin finished with 28 of his own.

The Moose continue their road swing with a date against the Milwaukee Admirals on Wednesday, Jan. 12. Puck drop is scheduled for 7 p.m. CT. Catch the game on CJOB.com/sports, the Manitoba Moose App and AHLTV.