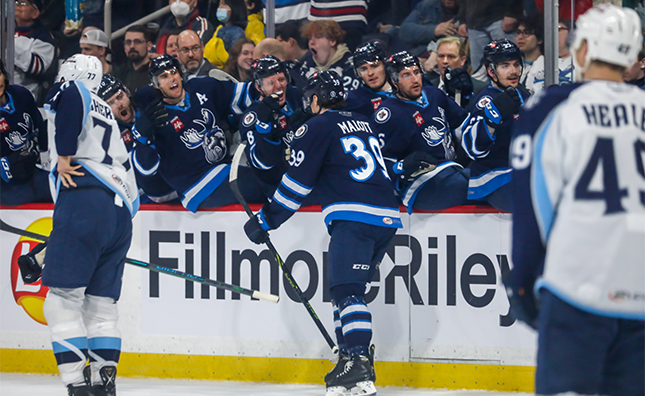 The Manitoba Moose (1-2) skated in Game 3 of their Central Division Semifinals series against the Milwaukee Admirals (2-1) Wednesday evening at Canada Life Centre.

The Admirals got on the board just 21 seconds into the game. Cody Glass attacked the net and was able to knock home a rebound past Mikhail Berdin for the 1-0 marker. Milwaukee added to its lead with under three minutes to play. Cole Schneider forced a turnover and found Jimmy Huntington alone in front. The forward buried the shot for the 2-0 lead. Mikhail Berdin ended the first period with nine saves, while at the other end of the ice, Devin Cooley finished with 12 of his own.

The Moose struck back in the second. With Manitoba on the power play, Ville Heinola dished the puck to Morgan Barron. The forward hammered home a shot from the top of the circle to get the Moose on the board. Manitoba kept the pressure on and was rewarded with a goal from Jeff Malott. Declan Chisholm grabbed the puck and sent it to Malott, who wired the high shot past Cooley to tie the contest 2-2. Manitoba was granted another power play and used it to take the lead. Chisholm found Leon Gawanke, who ripped home the go-ahead marker with 3:30 to go in the second stanza. Manitoba carried a 3-2 lead into the second intermission and was ahead 27-17 in shots.

The third period saw the Moose add some insurance. Nicholas Jones snuck a shot through from the point to push the lead ahead to 4-2. Manitoba added a tally later in the period from Luke Johnson to ice the contest by a 5-2 count. Berdin ended the night with 21 saves and captured the victory. Cooley was tagged with the loss finished with 30 stops of his own.

“Confidence is huge. Especially with a group that doesn’t have a lot of playoff experience. We’re on the bench and we’re a little bit snake-bitten. Last game we had 42 shots with only one going in the net. They’re thinking that as we sit on the bench. So, after the first one went in, good. But after the second went in I thought we played way better. Now we’re coming and guys are forechecking and making passes, the execution was good.”

You can catch the game on TSN, 680 CJOB, the Manitoba Moose App and AHLTV.