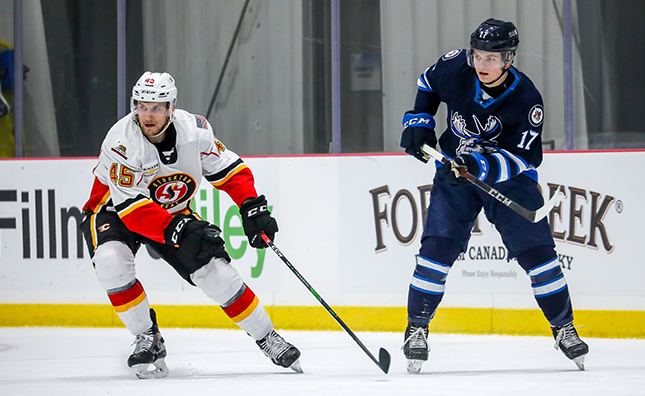 The Manitoba Moose (6-6-2-0) were on the losing end of a 3-2 overtime decision against the Stockton Heat (7-2-0-0) on Wednesday night at Bell MTS Place. The Moose killed off two early penalties to keep the game scoreless. With 6:03 remaining in the first period, Stockton struck first as Alex Petrovic’s shot deflected off Emilio Pettersen and into Manitoba’s net. With just 33 seconds remaining in the first frame, Cole Perfetti entered Stockton’s zone and found Skyler McKenzie who battled his way through the middle and ripped a shot past Heat goaltender Artyom Zagidulin making the score 1-1.

At 5:14 of the third period, Matthew Phillips capitalized on a two-on-one opportunity and tied the game 2-2. The Moose held the Stockton to only eight shots in the third frame and neither club was able to find the go-ahead goal in regulation. At 1:09 of extra time, Phillips collected a loose puck and secured Stockton’s 3-2 overtime victory.

“His one-on-one battles and his puck protection has been really good. He gets the puck and gets to the net. Now we’re getting to know him a little bit more so we’ll see what he brings for the rest of the season but so far he’s taking advantage of an opportunity.”

“Our second period was obviously pretty solid, it’s just a matter of us starting the game like that. It’s hard when you’re outshot in that same sense early in the first period. I think if we start games like we played in the second we’ll have a lot more success.”

The Moose take on the Stockton Heat on Thursday night at Bell MTS Iceplex. Puck drop is scheduled for 6 p.m. The game is available on MooseHockey.com/LISTENLIVE, CJOB.com/sports and AHLTV.com. The broadcast starts at 5:45 p.m.