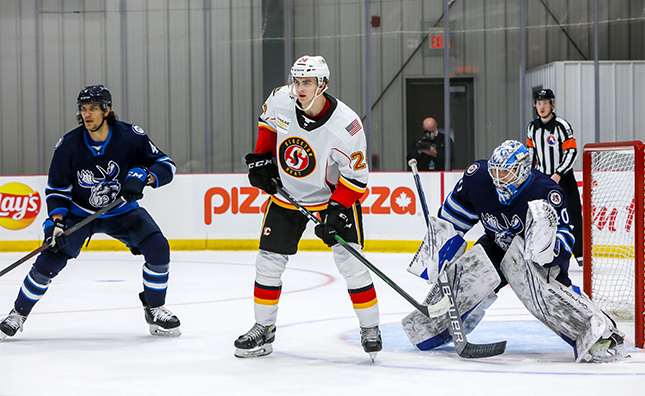 The Manitoba Moose (6-6-1-0) dropped a 6-5 overtime decision against the Stockton Heat (6-2-0-0) on Monday night at Bell MTS Iceplex. Martin Pospisil scored 8:43 into the first period giving Stockton the early 1-0 lead.

With 3:10 gone in the second frame on, a Stockton power play chance, Emilio Pettersen found a loose puck in front of Moose netminder Mikhail Berdin and improved Stockton’s lead to a 2-0 count. Just over a minute later, Haralds Egle ripped a shot through traffic and got the Moose within one. Midway through the period, Alex Petrovic scored on a Heat man-advantage and made the score 3-1 in favour of Stockton. With 3:12 remaining in the frame, Nathan Todd found space and picked his target and cut the Heat lead to 3-2. Just over two minutes later, David Gustafsson tipped a pass on net and Todd was on the doorstep to capitalize on the rebound and even the score 3-3.

With 5:07 off the clock in the third period, Mark Simpson cashed in on a rebound and gave Stockton the 4-3 lead. Midway through the frame on a Moose power play opportunity, Jeff Malott rushed up the middle and snapped a backhander up under the bar, tying the game at four a piece. With 3:05 left in the third, Matthew Phillips scored on a Stockton power play chance giving the Heat a 5-4 lead. The Moose called Berdin to the bench late and the gambit paid off. C.J. Suess collected on a rebound and tied the game again at 5-5 with 1:23 to go. The clubs needed extra time to decide a winner and, just 34 seconds into overtime, Glenn Gawdin capitalized on a two-on-one opportunity and stamped Stockton’s 6-5 victory.

“That’s a team that never gives up. They just work and work and work. They’re trying to run their routes. They battle hard. I feel like we had a lot of chances through the first two periods and in the third I felt we ran a little bit out of gas. But they kept pushing and got a point out of it.”

“I thought we played pretty well. Five-on-five we controlled a good amount of the play and we were getting opportunities in their end. Ultimately I think, on the penalty kill, it wasn’t our game. Five-on-five we were pretty good tonight.”

The Moose take on the Stockton Heat on Wednesday night at Bell MTS Iceplex. Puck drop is scheduled for 6 p.m. CT. The game is available on MooseHockey.com/LISTENLIVE, CJOB.com/sports and AHLTV.com. Broadcast starts at 5:45 p.m. CT.