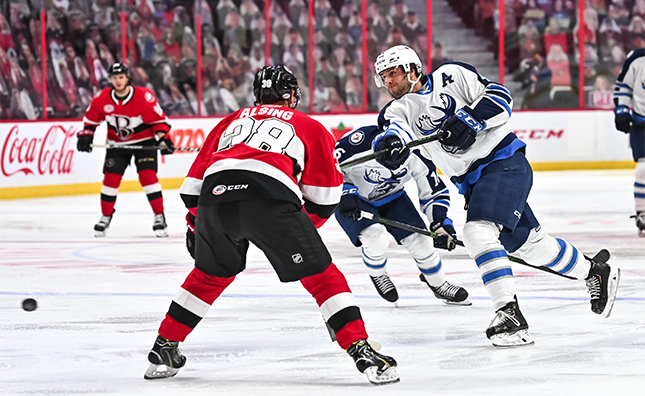 Game Story
The Manitoba Moose (18-13-3-2) dropped a 6-1 final against the Belleville Senators (17-15-1-0) on Sunday afternoon at Canadian Tire Centre in Ottawa, Ont. Just 1:22 into the opening period, Clark Bishop was pressured along the end boards and snapped a no-look pass behind him that went off Logan Shaw and found Roby Jarventie open in front of Manitoba’s net. Jarventie had time to choose his target and he capitalized giving the Senators an early 1-0 lead. At 3:31 of the first period on a Senators power play opportunity, Olle Alsing found Angus Crookshank for a one-timer. The forward blasted a shot past Moose netminder Mikhail Berdin and extended Belleville’s lead to 2-0. Despite the Senators’ two-goal advantage, the clubs registered 11 shots each during the first period.

At 4:48 Belleville struck again, Jean-Christophe Beaudin stole the puck in Manitoba’s end and found Cole Cassels alone on the backdoor. Cassels snapped a shot past Berdin and added to Belleville’s goal count. Just 29 seconds later, chaos ensued, and the clubs exchanged 67 penalty minutes from one play including five ten-minute misconducts, a five-minute major and five minors. The result on the ice was that Manitoba played down a man for seven minutes. While on a five-on-three man advantage, Roby Jarventie blasted a one-timer past Berdin and improved Belleville’s lead to 4-0. With 5:46 remaining in the second period, Peter Krieger and Cole Maier put on the pressure behind Belleville’s net. Kreiger stole the puck from the Senators and Maier collected it, wrapped around the net, and put the puck behind Belleville’s netminder Mads Sogaard making the score 4-1 heading into the final frame.

The Moose started the third period with 30 seconds remaining of a power play. Nathan Todd nearly capitalized as he rang a chance off the post. At 2:03 of the third frame, Beaudin and Cassels connected again, this time on a two-on-one opportunity, and Cassels netted his second of the contest marking a 5-1 score in favour of the Senators. Midway through the final period on a Belleville man advantage, Jonathan Aspirot ripped a shot through traffic and scored for the Senators posting the final score of 6-1.

Quotable
Thoughts on the 2020-21 season:
Head Coach Pascal Vincent (Click for full interview)
“What I’m really grateful for, is for the players, to be committed like they were for the full season. Grateful for the management and the ownership who are investing and believing in us. The fact that we played 36 games is an achievement. That’s a big investment and that’s a belief in the culture of our team. The developing, draft and develop and working with those guys. I think it was a great year for development and our team was outstanding the whole year.”

Forward Cole Maier (Click for full interview)
“I think it’s still just sinking in a bit that the season is over. It was a bit shorter but it feels like it’s been a while just with all the wild rules that we were following all year long. I think the group did a good job coming together. There was a lot of new guys and we ended up with a really good group. We had a lot of fun, we had that fun point streak there that we were running up until this weekend which was a fun ride and I think it ended up being a good time.”