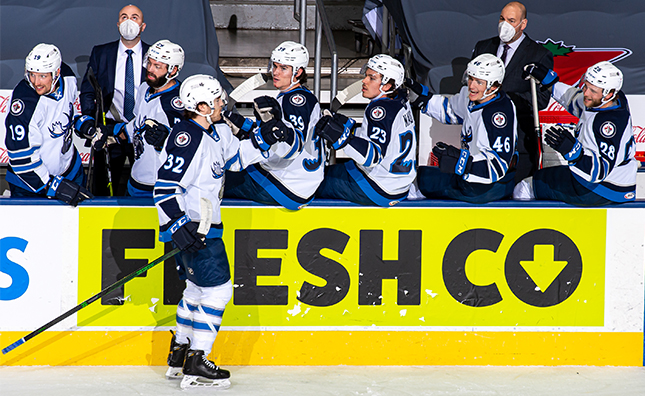 Game Story
The Manitoba Moose (16-11-2-1) claimed a 5-3 victory against the Toronto Marlies (11-14-0-1) on Thursday afternoon at Coca-Cola Coliseum in Toronto, Ont. At 6:12 of the first period, David Gustafsson forced a turnover in the neutral zone that Nathan Todd collected then saucer passed to Jeff Malott who earned a breakaway opportunity. Malott didn’t let Manitoba’s work go to waste and went five-hole on Toronto’s netminder Frederik Andersen to give the Moose a 1-0 lead. Just 1:41 later, Ty Pelton-Byce charged into Toronto’s zone alone, beat his defensive opponent and snapped a shot behind Andersen to extend Manitoba’s lead to a 2-0 count.

At 2:43 of the second period, Pavel Gogolev found a loose puck and flipped a backhand attempt past Moose netminder Mikhail Berdin to bring the Marlies within one. Toronto made a goaltender change midway through the frame and Joseph Woll entered the contest for the Marlies. With 6:11 remaining in the second period, Dylan Samberg, from below the goal line, sent a shot that banked off Woll and into Toronto’s net making the score 3-1 in favour of the Moose. The Marlies responded 4:42 later and scored two goals 33 seconds apart. Nick Robertson scored on a Toronto power play opportunity to bring the club within one then Rourke Chartier added a tally of his own and tied the game 3-3. This sequence led to Cole Kehler relieving Mikhail Berdin from Manitoba’s net. With 43 seconds to go in the second period, Cole Perfetti set up Nelson Nogier who was rushing down the middle. The Moose defenceman ripped a shot past Woll for a go-ahead marker.

Midway through the third period, Peter Krieger made a nice pass from the backwall to Cole Maier who blasted a one-timer into Toronto’s net and improved Manitoba’s lead to 5-3. The Marlies earned a late five-on-three power play opportunity, the club also pulled their netminder and improved the player advantage to six-on-three in hopes of making a comeback. Kehler was unfazed and held the Marlies off the board, leading the Moose to the 5-3 victory and eighth win in nine contests.

Defenceman Dylan Samberg (Click for full interview)
“I’m happy to be able to get it. Kind of felt a little sigh of relief and like a monkey off the back. But, no it was good and it was just a really good confidence booster.”

What’s Next?
The Moose face the Toronto Marlies on Saturday afternoon at Coca-Cola Coliseum. Puck drop is scheduled for 2 p.m. CT. The game is available on MooseHockey.com/LISTENLIVE, CJOB.com/sports and AHLTV.com.