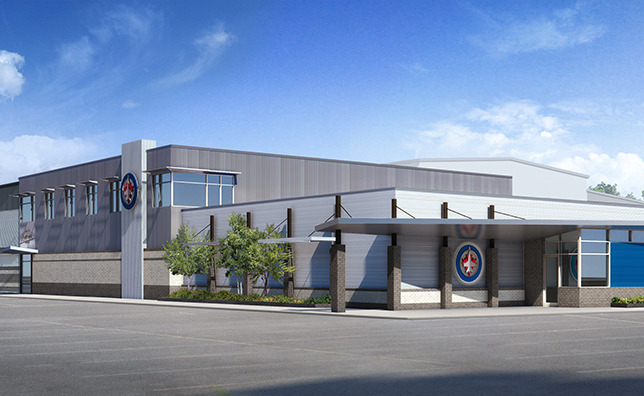 “We are very excited about this addition to the MTS Iceplex,” said Kevin Cheveldayoff, Executive Vice- President & General Manager of the Winnipeg Jets Hockey Club. “The size and scope of this investment is an indication the commitment of True North Sports & Entertainment Limited to the future of the Manitoba Moose here in Winnipeg, and the strategy of player development for the Winnipeg Jets. It was important for us to establish a long-term home for the American League affiliate of the Winnipeg Jets and we feel we are doing that with the construction of new offices and an expansive dressing room facility for the Moose, as well as a separate new one for the Jets who will practice at the facility when the MTS Centre is being used for Moose games and other events.”

The construction project will be built on the east end of the existing MTS Iceplex and will connect to Focus Fitness facility on the second floor. It will feature separate dressing rooms for the Jets and Moose with a player lounge, equipment and medical rooms along with coaching staff offices for each team. The teams will share a hydrotherapy room which includes two plunge tubs and therapy pool. A media workroom will be a part of the new project along with office and storage space for the Winnipeg Jets Hockey Academy that is growing this year to almost 700 student-athletes, with the support of the Winnipeg Jets True North Foundation and supporting businesses.

The $7.5 million expansion has been designed by Sink Combs Dethlefs, the architectural firm that designed the MTS Centre, and is being general contracted by PCL Constructors. The 48-week project is scheduled to be completed in time for the beginning of the 2016-17 hockey season, and is being funded exclusively with ownership investment.