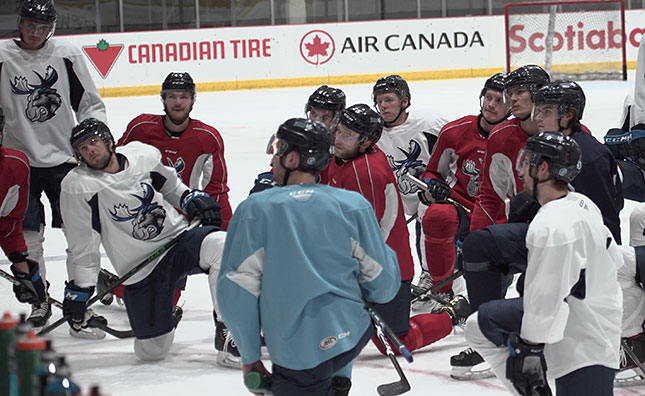 A total of 21 players hit the ice this morning for a 10:30 a.m. skate. The group consists of 13 forwards, six defencemen and two goaltenders.

On-ice sessions are open to the public following current health and safety protocols.

The Moose have signed four players to tryout agreements including forwards Thomas Caron, Colt Conrad and Nick Halloran along with defenceman Croix Evingson.

Caron, 21, posted 22 points (12G, 10A) in 30 games while captaining the QMJHL’s Quebec Remparts during the 2020-21 campaign. During a four-season junior career, Caron totalled 72 points (31G, 41A) in 146 games. The Candiac, Que. native also added 209 penalty minutes and was the QMJHL’s penalty minutes leader in 2019-20. Caron recently participated in Montreal Canadiens rookie camp.

Halloran, 24, recorded eight points (1G, 7A) in 15 games with the Ontario Reign during his first professional season in 2020-21. The Draper, Utah native played the previous four campaigns at Colorado College where he racked up 97 points (40G, 57A) in 119 games. Halloran went off for 45 points (19G, 26A) during the 2017-18 season which earned the forward NCHC First All-Star Team honours and a spot on the NCAA (West) Second All-American Team.

Evingson, 24, split his 2020-21 season between Niagara University and the Jacksonville Icemen. During his final collegiate campaign, Evingson posted a career high 12 points (1G, 11A) in 21 games with Niagara. The Anchorage, Alaska product then made his professional debut with Jacksonville, picking up one assist in seven ECHL games. Overall, the 6’5, 229 lbs. defender posted 20 points (2G, 18A) in 53 NCAA contests split between Niagara and UMass-Lowell. Evingson was a seventh round pick (211th overall) of the Winnipeg Jets in the 2017 NHL Draft.