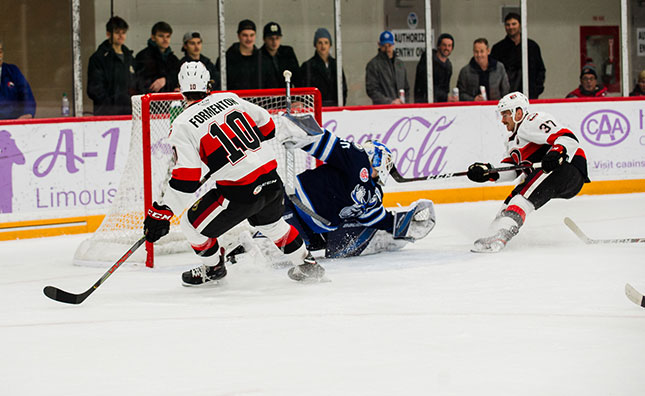 Today’s edition takes us back to Nov. 20, 2019 as the Moose tried to push their longest winning streak of the season to seven games.

After a slow start to 2019-20, the Moose went on their best run of the season. A six-game winning streak, and victories in eight of nine outings, brought the team to a 9-8-0-0 record. Following a brilliant home stand, the Moose hit the road for their longest trek of the season that saw the club away from Winnipeg for 17 days. The trip opened in Belleville and the Moose looked to start things off right against the Senators. 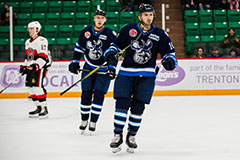 The Moose didn’t waste any time getting on the board at CAA Arena. Just three minutes into the contest, Nelson Nogier slipped a point shot through a crowd in front of Marcus Hogberg. The Belleville netminder booted away the wrister, but Nathan Todd, who had signed a PTO with the Moose at the beginning of the month, backhanded home his first career AHL goal. The forward was quite familiar with the Senators organization after attending training camp with Ottawa and playing against Winnipeg Jets prospects at the Rookie Showcase in Belleville before the season. Alexis D’Aoust also picked up an assist on the tally. D’Aoust was  playing his first game of the season with the Moose after a recall from the ECHL’s Jacksonville Icemen.

With five minutes to go in the opening period, Emile Poirier went wide before flipping the puck in front. Hogberg was able to direct it away from Andrei Chibisov, but was forced to smother a point blank chance from Jansen Harkins. On the ensuing faceoff, Harkins won the puck back to Poirier who zipped home his third of the season to give the Moose a 2-0 lead. The assist pushed Harkins’ point streak to an impressive 10 games as he continued to roll through the month of November. Mikhail Berdin, who was also enjoying a fantastic month, turned away 12 Belleville shots in the first and was just getting started.

Berdin was fresh off earning player of the week honours for the period ending Nov. 17, while allowing just five goals in four games. After a sharp first period, the Moose goaltender was called upon to make 13 saves in the 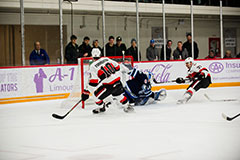 second stanza. Berdin hit the highlight reel by robbing J-C Beaudin after Vitaly Abramov opened him up with a slick backhand feed. Berdin’s best stop of the night came with 30 seconds to go in the period as a jam-up in front of the Belleville bench resulted in a two-on-oh for the Senators. Alex Formenton cruised in and slid the puck over to Jordan Swarz, only to have Berdin come speeding across to rob Belleville of its opening tally.

Undeterred by the Moose holding a 2-0 lead, the Senators continued to press into the third period. Belleville finally found the back of the net on its 26th shot of the contest, coming just 46 seconds into the final frame. Senators defenceman Christian Jaros lifted a puck toward the Moose net and Szwarz, not to be foiled a second time, deflected it past Berdin. The tally got the home side within one and set up a wild finish. Belleville continued to pepper the Moose net with chances. The netminder turned aside the next nine shots before the 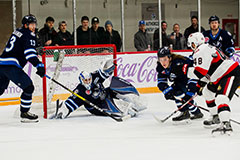 Senators found some room behind Berdin. With 3:40 to go, Drake Batherson received a pass while lurking on the far side of the net. With a seemingly open cage, Batherson rang his attempt off the cross bar. The Belleville forward raised his hands to his head in frustration. That was as close as the Senators would come. Berdin added four more saves for a total of 38 on the night, and the Moose held on for their seventh straight victory by a 2-1 final score.

Mikhail Berdin it was another exceptional performance for the Moose goaltender who won 10 games in the month of November. During that impressive run early in the month, allowed just 18 goals in 10 games while posting a .948 save percentage and two shutouts.

Emile Poirier had a knack for scoring big goals early in the 2019-20 season. Each of his first three tallies on the campaign went down as game-winning goals, including two in a span of three games.

Nathan Todd‘s first AHL goal couldn’t have come at a better time for the forward. The Ottawa, Ont. product was playing in front of friends and family that night in Belleville. In between a pair of professional tryouts with the Moose, Todd actually played four games with Belleville in January/February.

We’ll wrap up this series of feature games from the 2019-20 season with an overtime classic against the Colorado Eagles in the second Moose game of 2020.